Decoding: The making of 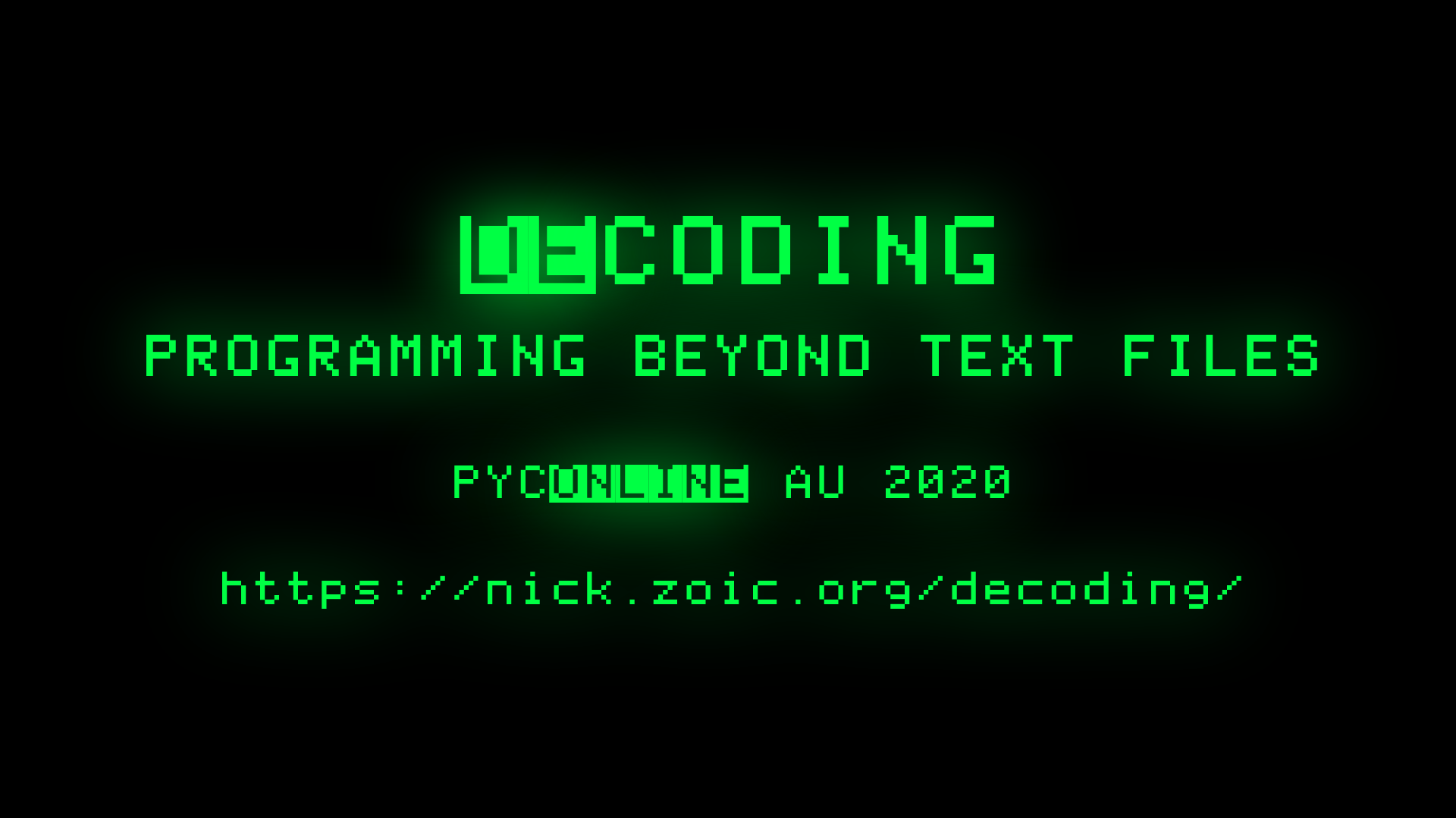 So PyCOnline AU 2020 is all online this year and I decided to prerecord my presentation of Decoding: Programming beyond text files so as not to have to worry about Internet on the day.

Recorded on my Olympus E-M5 mkII which I’ve not really used for video before but it can record 1080p at 50fps so I figured that would be good. 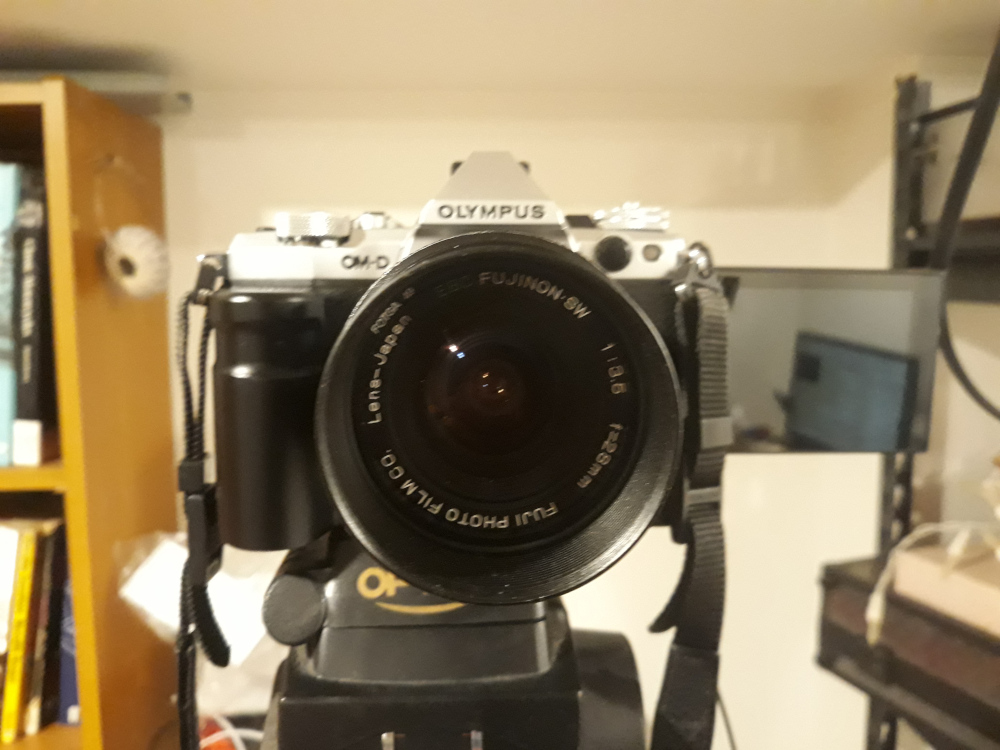 Lens is a old manual Fuji EBC 28mm f/3.5 on an adaptor (so, equiv 52mm on a m4/3). I picked this one just because it was the right focal length for the shot I wanted and brighter than the zoom at the same length.

I ended up filming at exposure compensation -1.7 to stop the metering getting confused by the dark background.

I shot this in lots of little takes because I wasn’t quite sure how it was all going to fit together and I thought that it’d be easier to fix it up later.

Originally I was planning on chroma-keying (green screening) out my background and putting the slides under my video. Instead I found there was lots of noise in the background so I just chroma-keyed out as much as I could and then put the slides over my video, using “Lighten” to combine them. It mostly worked. There’s a couple of moments where you can see my shoulder through the image.

Microphone setup was an Olympus lapel mic on a long cable, plugged into the camera, but because I kept getting caught up in the cable I ended up dangling it from the ceiling just out of shot. 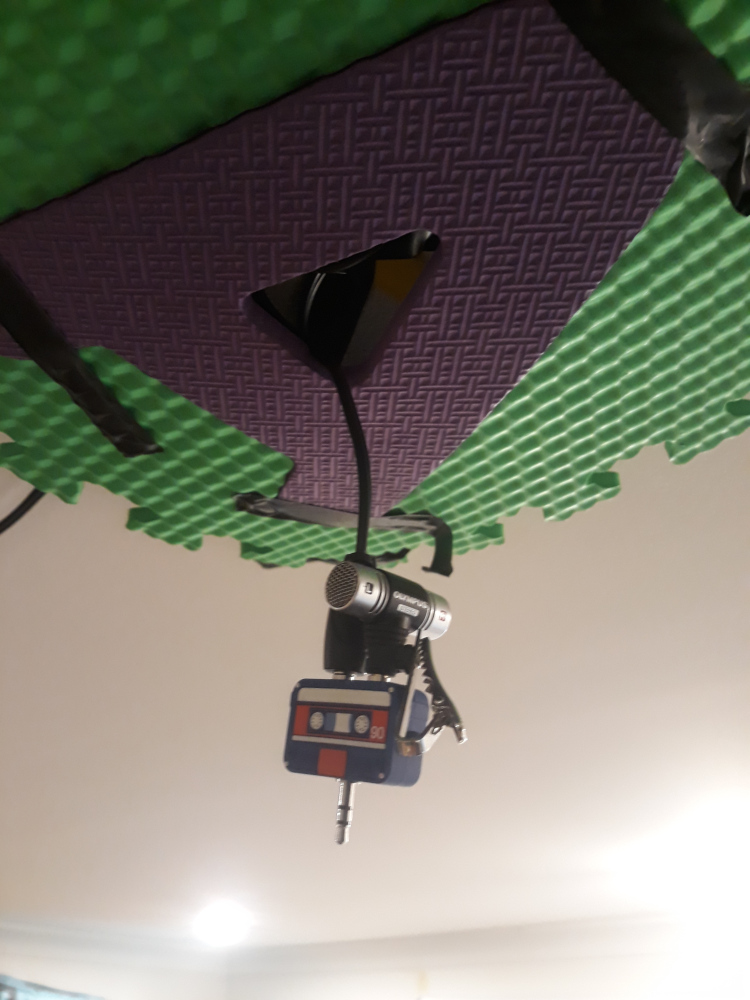 This kind of worked but it’s a bit “phasey” … this room is very reflective. I taped some foam to the ceiling to try and reduce the phaseyness but it didn’t help much. I didn’t have a proper adaptor for the mic either so it’s using a cute cassette tape shaped headphone splitter.

In total I recorded:

Quite a few bits had several takes where I flubbed one bit or another, plus every video has a few seconds of lead-in and lead-out, so there ends up being a lot left on the cutting room floor!

These were made with my usual flip.js script and HTML, on the offchance that I want to present this at a real live conference some day I figured I might as well have a real live slide deck. Then I just took PNG screenshots of each slide.

I should really get a better way of doing this together, markdown at the least since writing HTML by hand is terrible.

The stylesheet is meant to look a bit like an old APPLE ][ era computer, with an Apple font, inverse characters, green phosphor colour and a bit of a phosphor glow. It’s not very authentic but I kinda like it.

I edited it down with Davinci Resolve 16 which is fantastic and free.

I ended up using the Fusion ‘UltraKey’ component to delete the background, which worked okay. The most complicated Fusion code involved:

You can copy Fusion compositions from one clip to another by going into the Fusion mode, click ‘Clips’ up the top to show a list of all your clips, then select one or more clips to copy TO (with left click, like normal) and then middle-click on a clip to copy the Fusion composition FROM. Then you can tweak the exact alignment of stuff in each clip.

There was a lot of white noise on the recording too, so I reduced that in Fairlight.

I had a nasty moment towards the very end when with less than 24 hours to go to submit the video, on the final render I got this error:

Which isn’t particularly helpful. I still don’t know what it was complaining about. I eventually found an online tip which said you could make Resolve slightly less fussy about frame errors by going to:

Which may have left a single glitchy frame behind but so be it. The original message was utterly useless so I have no idea what I could do to fix it. Deleting fusion compositions where the error occurred didn’t help.

Dear @Blackmagic_News please hire me so I can find out who wrote this error message and snub them at parties.

A huge amount of data get created as part of the video generation pipeline. You’d better have somewhere fast to put it. I ended up having to delete a whole bunch of steam games to make enough room!

If I was going to start over today

I’m happy with what I submitted but I’ve learned a lot so if I was going to submit this somewhere else I’d reshoot it with the following changes:

I’ve just finished putting together the video for Journey Onward and it went a bit better than last time.

There’s a few things I’m not totally happy with and if I had more time I’d got back and edit, but it’ll do for now.

Anyway, not sure if this video will be published publically, if not I’ll make a “director’s cut” and chuck that out there …