2017-02-14 micropython / microcontrollers / esp32
The ESP32's capacitive sensors, and how to use them from MicroPython

I’ve been working on MicroPython for ESP32 recently and working on implementing some of the crazier hardware on the device.

Capacitive touch sensor controllers are widely available, but having the facility built in making the ESP32 competitive with cheaper SoCs which don’t already include these facilities. While I’ve been looking at the software, it’s been interesting to look at the hardware and see how it works as well.

The sensors work by allowing the pin to freely oscillate, and monitoring the frequency at which it does so. Attach the pin to a conductive pad, and bring something large and conductive, like a finger, close to it, and the pin will oscillate more slowly. The controller can measure this and detect that the pad is being (almost) touched.

Each sample takes about 8ms to complete.

I’m programming the ESP in MicroPython which just makes the experimental setup easier. Not all features are merged in yet, so if you want to use the TouchPad from MicroPython you may need to pull in my esp32-touchpad branch

I started off testing the hardware with flying leads and alligator clips, but since capacitive test sensors are affected by their surroundings it’s hard to get a consistent response in this way. So I made up some a quick test setup out a Sparkfun ESP32 Thing and a bit of single-sided blank PCB cut into four zones with a rotary burr.

The ESP32 board is stood off from the touch board with a layer of foam and double-sided taple, and a couple of layers of insulting tape over the top of the foil simulate putting the pads in an enclosure.

I then logged some measurements with the following MicroPython code:

… which captures 400 readings across the four pins as fast as it can, and then dumps the lot out for pasting into gnuplot. Each sample takes about 8ms, so the capture is over about 3 seconds.

Swiping a finger from GPIO15 to GPIO12 shows the way the multiple oscillators respond:

The ‘resting’ frequencies of the central two pads are lower than that of the pads at the ends, presumably because they are somewhat coupled to them … you can see that touching GPIO15 has a small effect on GPIO14 as well, and GPIO13 is effected by both GPIO14 and GPIO12. GPIO12 is especially messy, I think because the blue wire connecting it runs behind the pad for GPIO13 for quite a way, inevitably coupling them. Any design using the capacitive sensors is going to have to take board layout seriously!

A closer look at just two pads (at twice the sample rate, and a larger number of samples) shows that there’s a smooth crossover between the pads, where your fingertip is close to both of them. The curves are nice and smooth, suggesting that they don’t interfere much. It might be possible to get a longer transfer between the two by interleaving tracks at the edges, perhaps even tapering them together like so: 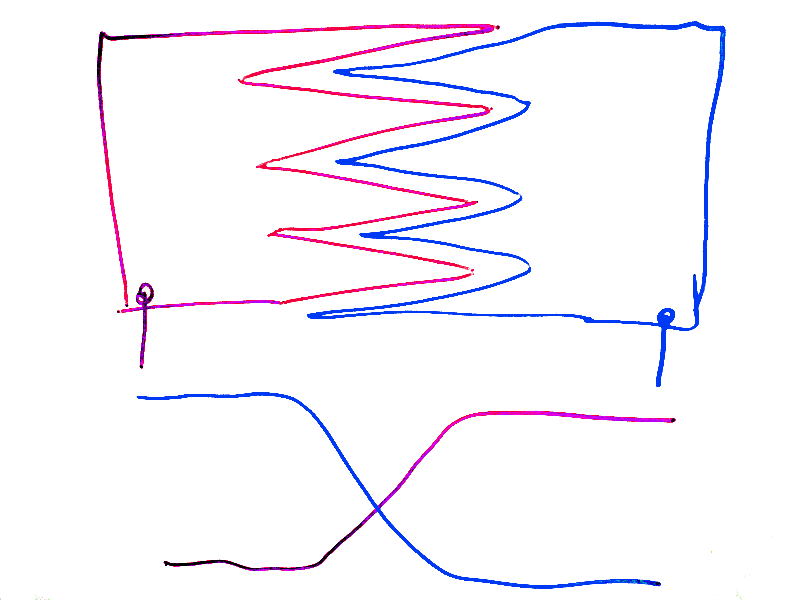 The sensors work pretty well right through the PCB, these traces show a touch on the non-copper side. Again, good PCB design practices will be needed to prevent interference!

Just out of curiosity, I got out the trusty CRO to have a look at how the signals for the touchpads work. Photographing CROs is not exactly easy, so please forgive these lousy images:

Unfortunately, my CRO is sufficiently old as to have a fairly large effect on the system under test (t.read() was 286, like being touched!), so I’ll have to come back to this with some better test equipment.

This first one shows the pin and pad oscillating happily with no touch. At 10us per division that’s about 14ms per cycle or 71kHz. The vertical axis shows the signal going from about 1.5V to 3.7V above ground. At this point, t.read() returns about 300. 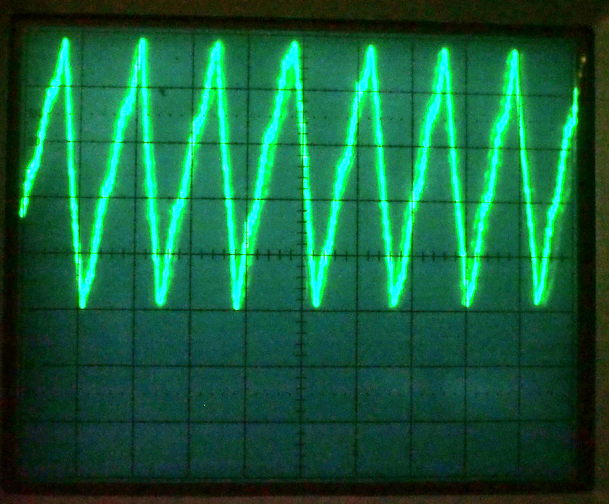 The second shows the waveform while being touched, at the same setup. The frequency has reduced to about 34us per cycle or 30kHz. At this point, t.read() returns about 230. 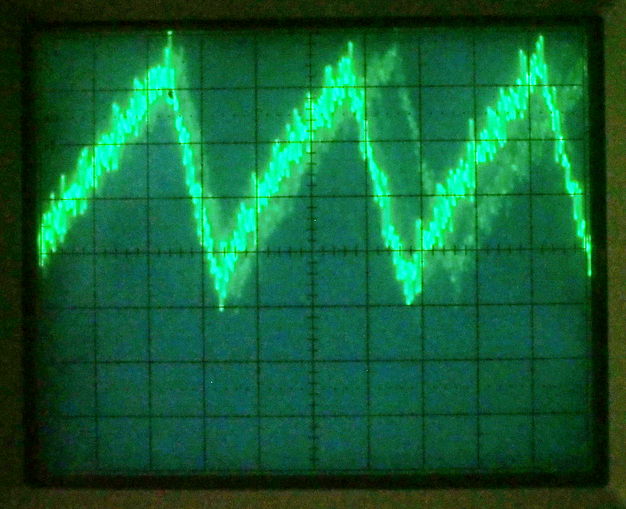 Interestingly, the oscillator output isn’t constant, but occurs in about 8ms bursts with about 30ms ‘off’ between them. 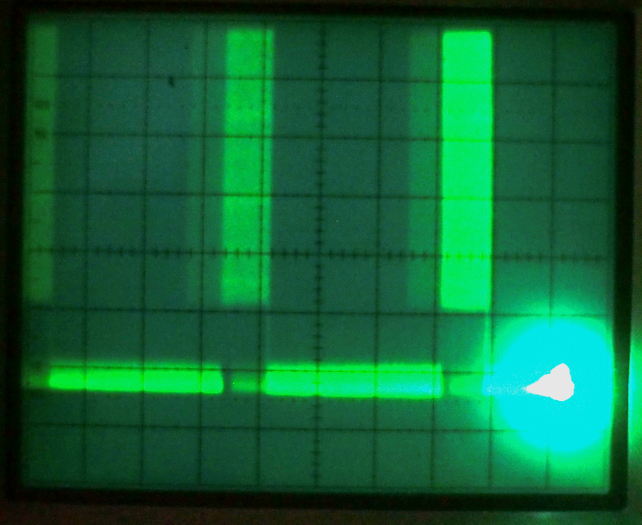 I talked about the touch sensors at the Melbourne MicroPython Meetup and got some great feedback from Angus, John, Lachlan and others as part of the Minimum Viable Badge concept.

I think a better conceptual model for captouch isn’t that you’re grounded and the device is coupling to you (how can this work for double insulated devices, battery powered devices, etc.) but that there is a coupling between the ground plane and the electrode, and when you move your water-filled limbs into this space you are changing the properties of that field

This is a really good point and something I’d never really thought critically about. Compared to a chip, Earth is big, people are big, same thing surely :-). But this is some pretty fuzzy thinking.

The experiments I’d done had the board grounded by the USB lead, so would they work differently on battery power?

I’d also assumed that capacitance to a ground plane would be a bad thing, so I’d avoided having a ground plane … Gus also pointed out TI’s Capacitive Touch Hardware Design Guide which says:

Ground planes, both coplanar and on neighboring PCB layers, reduce noise. This is the same principle discussed in Section 5.1. The ground or guard structures are placed as close as possible to reduce noise but also kept far enough away to minimize parasitic capacitance”

OK, so new test board design required! I cracked out the rotary tool (and eye protection, kids!) and made this out of 1.6mm single-sided board: 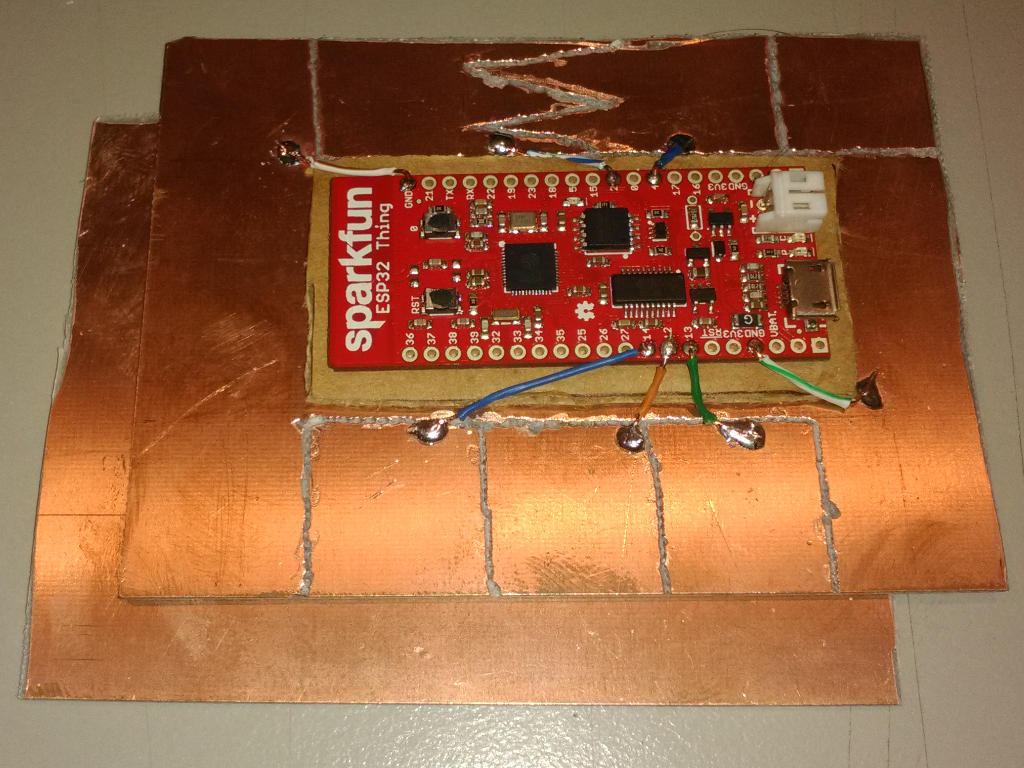 One edge has three 20x20mm contacts, the other has two contacts with a zigzag boundary. The second piece of board is a removable backplane, to see how a groundplane affects the touchpad behaviour.

The insulating tape I’d used in the previous setup was a lot thicker than you’d expect from PCB mask, so I used some thinner pallet strapping tape this time, it is smooth and very strong but only 0.1mm thick.

I then assembled the board and the backplane, and double-sided taped them to my desk to stop them moving around …

The first thing I did was build a shiny new MicroPython v1.8.7-965-ge7aefc7a and deploy it to the board.

I wanted to run the board on batteries so as to disconnect it from the PCs ground, so reading results over the REPL wasn’t going to work this time. Either the PC could be the client or the PC could be the server, it doesn’t make a lot of difference but I ended up going with the former.

This code is not very elegant, but it is enough to listen on port 9999 and when a client connects, dump touchpad readings at it:

Then I can just connect to this like so to collect data (yes, you need to know what IP address your device will DHCP as …) and write it out in a format convenient for gnuplot.

(Sorry about the tiny fonts. Vertical axes are the output of the machine.TouchPad.read() function, with 50 unit divisions. Horizontal axes are time, with 500ms divisions. The images are SVGs, so open them to zoom …)

First up, the zigzag side. The first plot shows a slow swipe from left to right. You can see a slow transfer between the two touchpads, it is fairly linear so I’m calling that a success despite my clumsy engraving. Redoing this with a properly etched PCB would be nice!

The second plot shows three taps on the left hand, middle and right hand end of the “slider”. It’s pretty easy to see which “button” is which.

Next I tried the “three squares” side, with the same experiments.

I also tried the same experiment without the ground plane, and, well, turns out that a ground plane is a very good idea:

Channels 4 and 5 are very noisy, and actually increase in frequency when channel 4 is touched, which is weird. Channel 6 was much less effected by noise, probably because it is surrounded on two sides by ground plane and also the solder joint to the blue wire there is very close to the ground plane which might give it just a little more capacitance to ground. Or it might be that 4 and 5 are interfering with each other.

Having had a look at the charts, I also wanted to see what effect having a narrower contact would have, something closer to the width of a fingertip. So I cut that middle square in half and connected the halves to channels 5 and 6. The old channel 6 contact is now on channel 7. 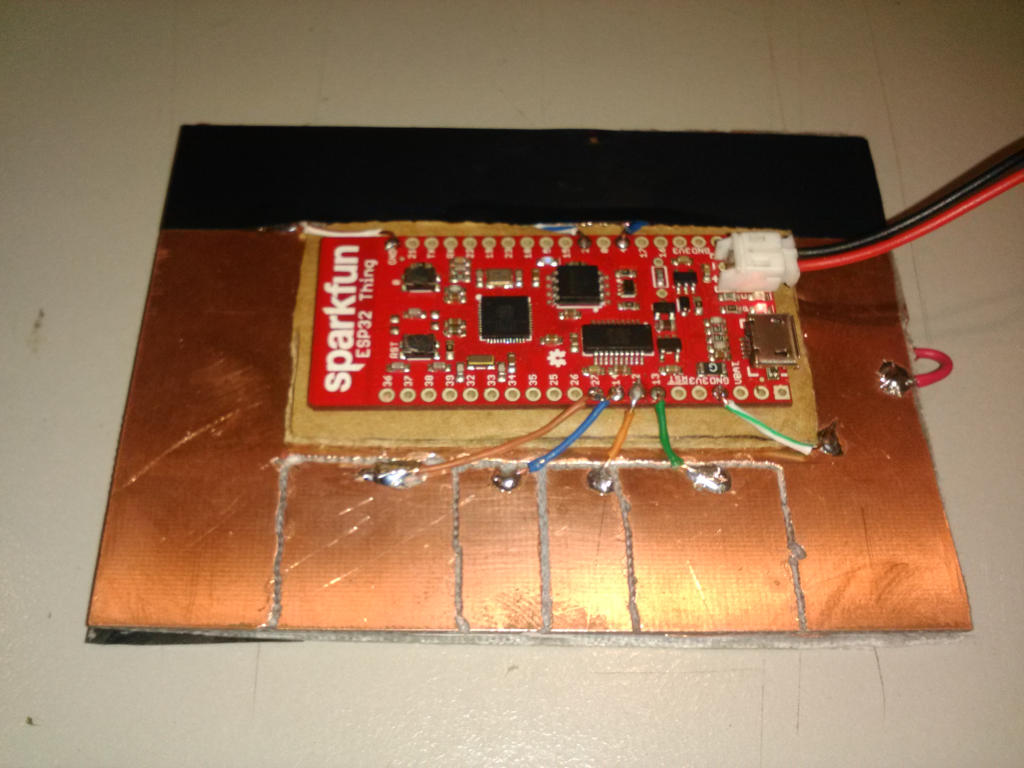 You can clearly see the difference between the middle, narrow contacts and the other wide ones in their rest state. Plus there’s a lot less dead area in the middle.

It should be possible, I think, to find a formula which takes in the values for the four channels and interpolates a fingertip position.

Gus also asked if plugging into USB made much of a difference. This one shows the readings with and without a USB connection. The scale moves around, but the signals aren’t much different. I’ve still got to try actually wearing this thing as a badge and see how it behaves.

Now working on touchio.TouchIn support for CircuitPython on NRF This is a little bit of single-sided PCB with a second piece glued on the back as a ground plane and two 1MΩ drain resistors from the pads to ground. The pads are covered with pallet strapping tape as per above. 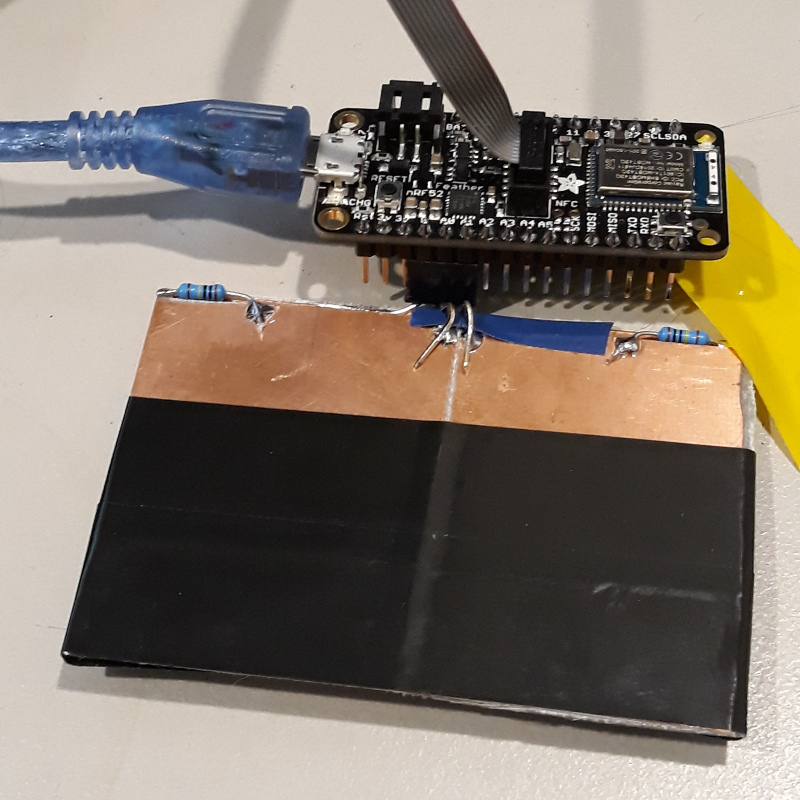 Reading touch events is a fair bit harder because there’s no working free-running oscillator, so instead I’m having to measure the pad capacitance from the rate the pad charge decays through a 1MΩ resistor. I’m doing this by switching the pin to be a digital out, setting it high, then changing it to be an analog input. Hacky but effective. 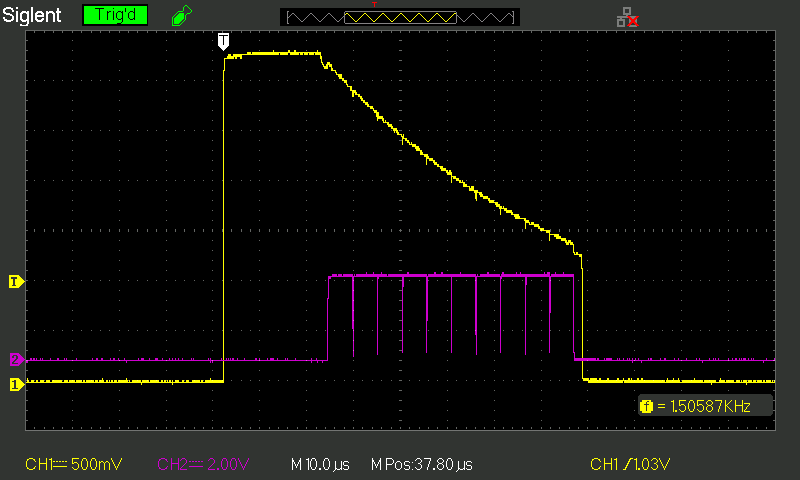 The yellow trace is the pad voltage, the purple is an I/O pin I set up to show when the SAADC samples were taken. The capacitance of the ‘scope leads effects the numbers a bit making it hard to detect touch while the leads are on, but this was a great way to work out what was going on inside the device.

You may also notice that since the initial post I’ve gone and bought myself a DSO, a Siglent DS1102DL+.

You might also enjoy this excellent Touch Sensor Application Note

I’d really like to experiment further with a 2D touch pad which would let you interpolate a 2D position from 4 channels … might be time to work out how that PCB mill works!