The first version of Flobot was in C. I’d looked at NodeLua and decided it wasn’t really going to work for me, so I ended up writing it in C and implementing a very simple VM to run the flobot instructions. This worked in the end, but really I’d under estimated just how capable a CPU the ESP8266 is and so I spent way too much time worrying about performance, forgetting that it really isn’t that much slower than my first Linux box.

The main drawbacks were:

Thankfully, in the meantime, MicroPython came to the ESP8266 and things got a lot easier. It talks JSON naturally. Rather than implementing a VM, I just compile some Python bytecode into existence and run it! The Python bytecode interpreter is a pretty full-featured thing, so this also makes more advanced features like components possible.

Flobot is intended to be an educational language, but it of limited depth. Dragging and dropping components and wires works great for a bunch of simple experiments, but (absent monitors in the several square meter range) it’s pretty limiting on the total complexity of programs you can write. So if that happens, we can just switch across and edit code in Python, also right there in the browser … editing the same program you’ve already written graphically!

And then, since Flobot itself is written in MicroPython … students who’ve grown up hacking with Flobot can hack on Flobot!

I wrote earlier about the mBot and, well, it is a nifty piece of hardware and there’s a heap of them out there in schools. The mCore board runs a ATMega328 which is not going to be running MicroPython any time soon, but the firmata firmware lets the CPU take orders from the serial port. Usually that’d be used to control the mBot over USB serial or bluetooth from something like Johnny-Five.

But it’s pretty easy to set up an on-board ESP8266 to run Flobot and talk to Firmata over the serial port … so then Flobot can control mBot! I call this the Brain Slug. 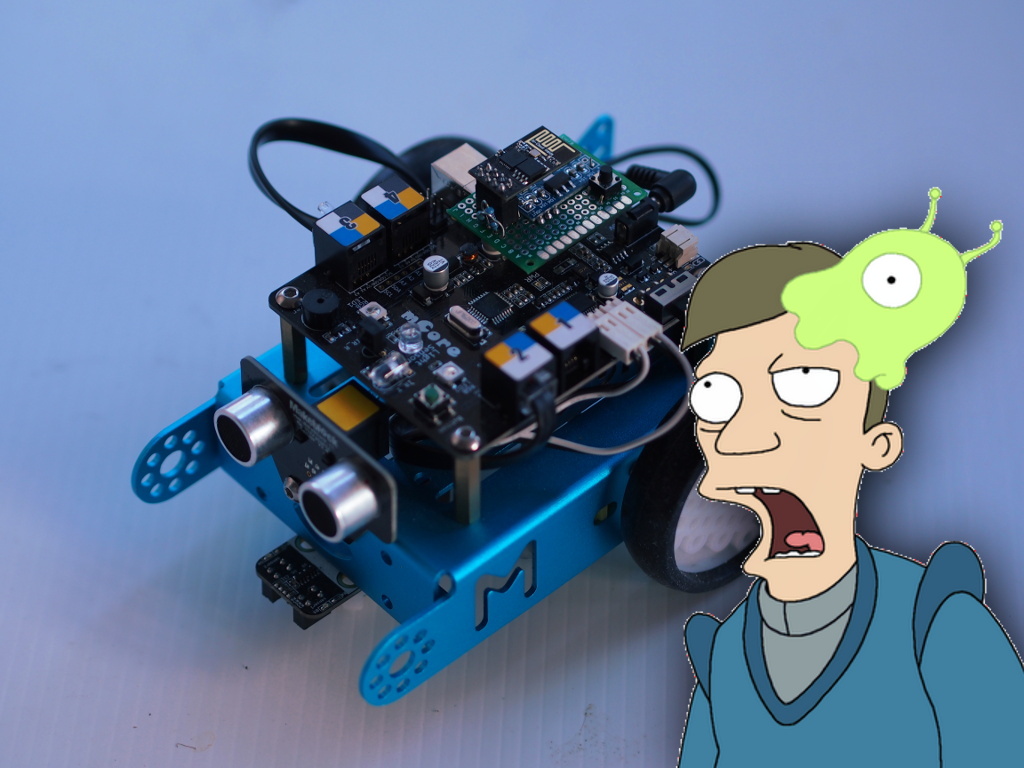 The tricky bit is that it needs the UART and the UART is generally used for the REPL. But with some small tweaks (okay, so switching off the serial REPL) it should work … and that’s where the original MicroPython investigation came from, because when I started digging into the code to implement Firmata I discovered that the original C implementation, while working, was very very ‘brittle’ and hard to change.

I’ve also got to implement a few other bits and pieces:

I got to talk about Flobot at PyCon AU which was incredibly exciting and energizing … it’s really inspired me to get this project moving again. More updates soon!