For updates, see the

I’ve talked about my experiences with mBot already, and concluded the idea is good but the implementation is a little clumsy for the primary classroom. Which is a pity, because the little robots are immediately fascinating to very young kids.

To summarize, the things I think are great are:

One of the harder things to explain to novice programmers is the concept of variables.

If you ask a functional programmer, they’ll explain that this is because immutability is the natural way of things and variables are a historical accident). One way to get around this is to move to a pure functional approach, but our robots have to actually do something which means that we can’t be entirely pure and there’s no way in the world I’m going to try to explain monads to primary school kids.

Additionally hardware and networking functions can be very slow, requiring the programmer to think about asynchronous behaviours. For example, the ultrasonic sonars used on a lot of robot kits take many miliseconds to acquire a distance measurement.

So I think the way to go here is a Dataflow / Reactive paradigm. Sensors create data and actuators consume it, and the programmer hooks up functions a flows between these to control the behaviour of the robot.

Examples of thing kind of programming include Labview and Spreadsheet Formulae and while it isn’t a very common paradigm it is quite easy to explain and use.

You can also blame nostalgia for Rocky’s Boots. This was an amazing game for the Apple ][ and early PC, which taught kids like me to construct simple binary logic circuits to solve puzzles in an interactive maze. You can play online here thanks to the Internet Archive:

The other worst thing to explain is syntax. Missing parens, misaligned blocks, typos, semicolons, the lot. Sure, as programmers we get used to it but the great thing about Scratch is that that stuff isn’t there to scare kids off.

So what I’d like to do is set up a graphical editor for the dataflow language. 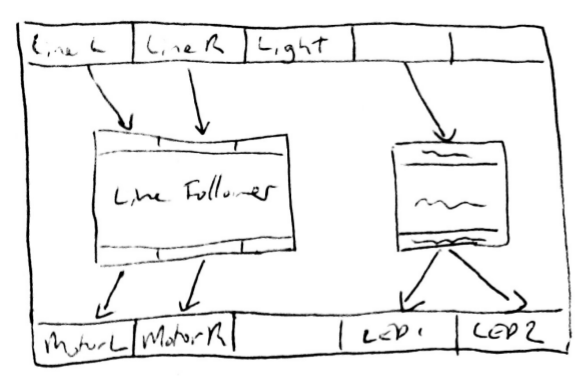 But I don’t want to have to install applications on the desktop, nor do I want to get stuck with development for the many native platforms. So I think the way to go here is HTML5.

Shock, horror! But think about it. The robot itself has only a very simple CPU and runs the simplest of web servers, but the client you’re connecting to it with is many times more powerful (even if it is a phone). If we make the client do all the hard work, we can simplify the microcontroller code as far as possible.

So: The microcontroller runs a web server and GET / serves up a page which is, to it, just a binary blob. That page includes an HTML5 app (loading assets and libraries from the Internet if necessary) which lets a user graphically edit a program.

As the user changes the program, the changes are POST ed to the microcontroller, which updates its list of instructions on the fly.

In the long run, I’d like to support complex types with units, such that the units matter and you can’t plug a degrees C output into a mA input. But for the moment, I’ll probably just make everything a 16-bit signed int or maybe shift it down by a factor of 100 so there’s a couple of decimal digits to play with. The ESP8266 has some software floating-point support too.

Constants would also be defined and could be changed to alter behaviour.

Obviously the program has to do more than just move numbers around. Builtin operators would include adding, multiplying, dividing, thresholding and sigma-curving numbers, but also time-varying operations such as differentiating, integrating and slew limiting need to be supported. This means the operator functions need a “time since last update” input. 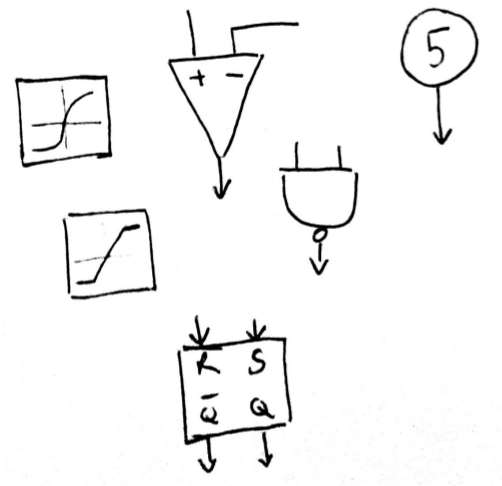 The code editor wouldn’t be a text file editor even by proxy. The flobot language would be a datastructure serializable to JSON, but edited directly in memory. The app could use the HTML5 File API and/or the git HTTP API to load and save source files.

The symbolic code is likely to be relatively verbose, and so rather than interpreting it directly it should be compiled down to a bytecode for execution on the MCU. This can be done in the HTML5 app. While it seems like a big ask to write a compiler in HTML5, remember that the source doesn’t need parsing as it is already a big datastructure, and the output is a bytecode rather than native code.

There’s a bit of an open question here about how big the transformation should be … do I just squish the dataflow graph into a compact binary form and do more work on the microcontroller end, or do we generate actual ESP8266 binary, or generate a bytecode somewhere in between? I suspect the only way to get a feel for what will work is to try it.

One interesting aspect is that each “port” is set from exactly one “instruction”, and so we can just have a long list of instructions each of which always writes to its corresponding port. In the longer run, I’d like to propagate changes through the graph, but for the moment just interating over all nodes will do.

By keeping the requirements on the MCU very low, something like the ESP8266 could be used. The ESP8266 firmware understands WPS and DHCP and then the robot could register its address so it can be looked up and contacted directly on the network.

When the user navigates to the address of the robot, a simple “index.html” static page loads the HTML5 app code (perhaps from the Internet if the flash is a bit small), and a simple REST-ish API lets the app upload and debug code on the MCU. The current value of each “port” in the dataflow can be retrieved and displayed in real time on the app, making for easy debugging, and as connections and parameters change in the app they can be immediately changed on the MCU giving kids great feedback.

If all the required libraries and assets can be squeezed into the device’s flash memory, then a user can connect to the device with the ESP8266 acting as an AP. No other infrastructure is needed.

But the ESP8266 can also join an existing network, and in a classroom situation this might work better. In this case, though, how do we find the IP addresses for the devices? With a bit of luck DHCP will take care of mapping hostnames to each device, but if not we can use a third party registry like DynDNS or equivalent.

This project is a work in progress. The first step is to try and get the HTML5 GUI up and running, and while I’m doing that I’ll get hold of some ESP8266 modules on Ebay and try and get a handle on programming them.

There’s now a FloBot project on Github with some very minimal code in it, just me messing around with how to write a standalone GUI for now. I’m a bit torn between trying to do this with lots of floating div s or building the whole thing as SVG. Either will work, its just a matter of working out which is more elegant …

… And messing around with hardware experimenting with stepper motors and drivers in NodeMCU: 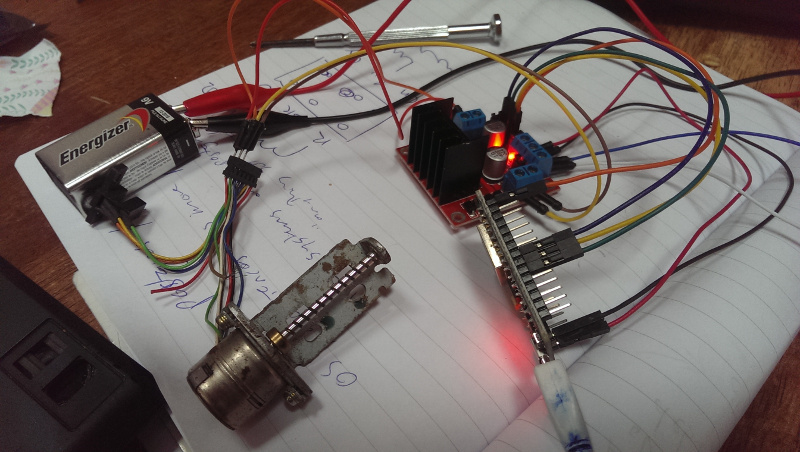 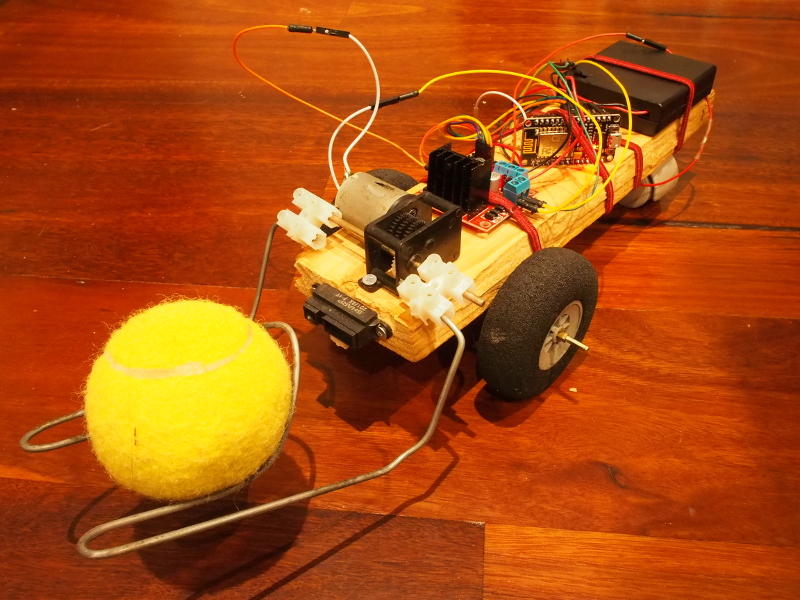