Experimenting with an Nvidia Jetson Nano

I grabbed an Nvidia Jetson Nano Dev Kit board from Seeed … well, I was ordering some other stuff and it was on sale and it just kinda happened … anyway, they’re rather a cool little unit and I wanted to see how it’d go as a PC for my office.

I do do a bit of development, and this board is likely to be painfully slow for compiling stuff, but the idea is to see how it goes as a desktop and if it makes sense to farm the compute-intensive stuff out to a headless PC, or to a cloud server.

There’s a 5.2GB image file to download , which contains a ~12GB disk image. This seems a little excessive to me. Sure, it’s actually a Linux distro but Alpine for ARM manages to fit a lot into under 85MB compressed.

How exactly is the Jetson Nano image 60 times this big? Well, it turns out that it includes gnome, and chromium, and LibreOffice, and Shotwell, and Thunderbird, and … well, lots of stuff. Python 2.7 and Python 3.6 and Perl 5.26.

It’s pretty much ready to go as a Linux PC out of the box.

I ended up popping up to the shop and grabbing a “64GB Sandisk Extreme A2”, claiming UP TO 160MB/s read and 60MB/s write.

Writing the initial image onto this from my laptop started promisingly at 100 MB/s or so and then slowly dwindled away to 15MB/s, but I think that has more to do with the shonky USB adaptor I was using. Still, it go there fast enough.

Looking at this card from my laptop, it appears to have 14 partitions of various sizes, which seems odd. There’s also an ominous warning:

So I finally found my 5V 4A power supply and booted the device. On first boot it gives you the option to resize that first partition, although I’m still not sure what all the other ones are for. If you’ve got it networked you can then upgrade Ubuntu packages.

Disappointingly, the DisplayPort on board is only a DisplayPort … it won’t work with the normal DisplayPort to HDMI converter cables. Apparently it will with some ‘active’ adaptors though so I’ll try to get hold of one of those.

UPDATE: The one I bought was described as an “active converter” but doesn’t work. I suspect, short of buying a converter about the same price as the Nano board itself, it can’t be made to work. Never mind.

The distro doesn’t seem to include the “Nsight Eclipse Edition” any more … there’s a /usr/local/cuda/bin/nvcc but no nsight on this disk, and the usual download link doesn’t offer a ARM8 architecture. I saw a release note somewhere indicating that it was maybe no longer included due to a transition to Nsight Visual Studio Edition but I’m not clear on this yet.

You can also develop remotely but I’m not sure what that’s all about.

Not A Big Fan

When I ordered the Nano, I figured I could fit some other kind of fan to the top if needed: perhaps a normal PC case fan fitted to the top of the enclosure and blowing down onto the heatsink. The idea being that a bigger fan would be quieter for the same amount of cooling. However it turns out that while the dev kit has a 4 pin fan header (yay!) it’s only at 5V, not 12V as per every other fan header.

So short of making up a little boost converter board or something, the choice of fans is very limited. For now I’ve ordered a tiny 5V 4-pin fan from Ebay which seems to work quite well considering how tiny it is. 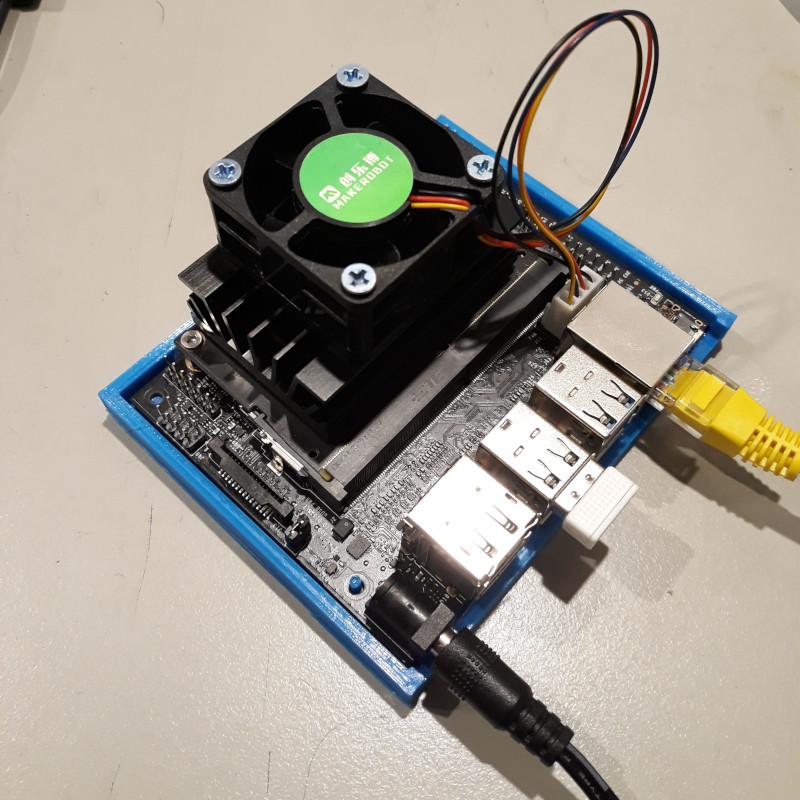 Based on this article on the Jetson Nano Thermal Performance what I really want to do is to load the CPU/GPU up with a difficult task and then measure the equilibrium temperature at various fan RPMs. So far I’m having trouble finding something which is enough of a load, the closest I’ve got is glmark2 which can be run continuously with:

… but even with no fan these are barely enough to get the processor to 53⁰C so I need to find a ‘heavier’ benchmark.

Some performance figures with the tiny fan mounted on the heatsink (sorry, I don’t have a dB meter):

The aim here is to characterize the heatsink as designed, I’d like to make a little printed plastic case for the board with a side-mounted fan, possibly with some kind of shroud to direct air through the heatsink.

I tried 3D printing a little case for the board, but the cases I found were all pretty fussy with little holes all over and didn’t print well for me. So I ended up designing a little ‘sled’ just to keep the board off the desk and make sure it didn’t short out on a paperclip or something tragic like that.

The distro it comes with is Ubuntu 18.04.3 LTS Bionic Beaver, which is pretty old now.

The usual do-release-upgrade process, normally very reliable on Ubuntu, ends up with the board in a video reboot loop … it gets as far as the Nvidia splash screen then goes black for a while then back ‘round again.

There might be an obvious solution to this but the easiest thing was to just re-flash the SD card and start over. Note to self: Don’t do that again.

I did however do the usual apt update && apt dist-upgrade && apt autoremove … which works fine.

OpenSSH is already set up, so once you’ve got the initial user and network setup done it’s pretty easy to use the device headless.

I’m using it as a display as well, with x2x running to share the keyboard, mouse and clipboard between them over ssh.

It’s plugged into gigabit ethernet but I’m planning on adding a M.2 E WiFi card in the near future.

UPDATE: It works fine with a very cheap USB WiFi adaptor, so I’ll probably just stick with that.

I started off with this CUDA Tutorial which gives a pretty easy entry into how CUDA programming works.

I then had a look at Conway’s Game of Life on GPU using CUDA which is a great introduction to thinking in CUDA.