At LinuxConf this year, Ruben Rubio spoke about Blue/Green deployment as a way of formalizing the deployment process and minimizing deployment risk. By using immutable infrastructure, we can avoid getting our configurations mixed up, and by keeping the old infrastructure around until deployment is complete, we have the opportunity to roll back easily.

I’ve done this before with load balanced servers:

… but Blue-Green deployment takes this to the next level by always creating new “Green” containers every time, and throwing away your old “Blue” containers once they are no longer needed.

I really like the idea of containerized, immutable servers: actually, I’d like to roll the entire container state into Git, libraries and all. Who needs state anyway! It only gets you in trouble! At this point, though, there’s just one minor problem: most web services need to store some state at some point, and it ends up in a database.

Ruben’s talk assumes that the database is outside the deployment system, and doesn’t change with upgrades, so it’ll work equally well before and after. Or at least that any schema change can be done incrementally, like adding a new table. My experience with relational databases is that schemas change all the time, and that the changes are not always backwards or forwards compatible. Often, for example, you might decide to denormalize some part of your database for which JOINing is particularly painful, and this can neither be rolled forwards or backwards easily.

One of the things I love about conferences is that the ideas from one talk keep rattling around in your head until they smash into the ideas from another talk. Shortly after the Blue-Green Deployments talk, someone mentioned CQRS.

Most of the time, we assume that we use the same kind of API for reading and writing. But this is not necessarily the most sensible model. Often, a database cluster will have a single master which accepts all writes, and a number of “read replicas” which can handle queries. The requirements for these systems are quite different, so in some ways it makes sense to consider them separately.

This leads to the idea of Command / Query Responsibility Segregation. Greg Young dicusses CQRS here and while it isn’t a comfortable fit for all problems I think it is interesting as it reflects the underlying reality of database transactions.

I’ve previously proposed an architecture which enforces that all writes are simply submissions to a work queue which return immediately. (And plenty of others have looked at similar architectures). These submissions are also required to be idempotent, so retransmitting them if you don’t get a confirmation is okay.

One feature of Blue-Green Deployments is that we want to be able to prepare our “Green” systems before rollout, and fall back to the “Blue” systems if rollout goes badly. This makes database deployment tricky.

How about if we could just clone the “Blue” database, make our changes, and still keep our data in sync? Well, if we’ve managed to force ourselves into the idempotent work queue architecture, this becomes rather simple: 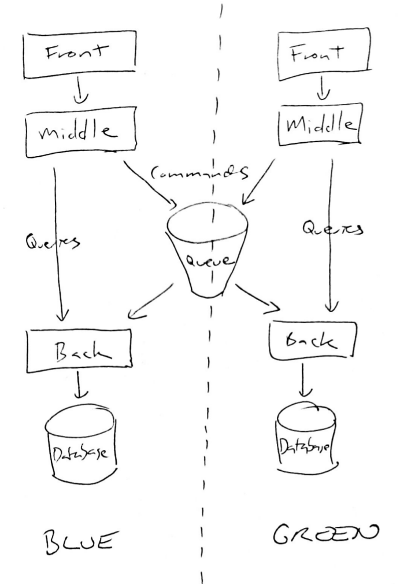 Messages in the queue are received by both backends, and operated on accordingly. The “green” side of the queue can be paused while the database is cloned and upgradeed, and then restarted to get the databases back in sync. Because the work queue operations are idempotent, it doesn’t matter if the same operation is repeated before and after cloning.

An update of a user’s contact details might be a different database operation on each database, but each is free to interpret it in their own way. Of course, if there’s a whole new entity in Green, then the Blue backend may not know what to do about it, but uninterpretable queue entities can be put aside.

The only thing the Blue and Green systems now have in common is the work queue, whose state is ephemeral in any case.

Accepting architectural constraints (for example an idempotent work queue approach to updates) can lead to simplifications of other parts of the system and address previously intractable problems. I think this kind of approach is worth closer consideration.