Presented as a lightning talk at PyConAU 2017: Omnicode!

Unicode is pretty cool. All languages in the world, and a few others, all in one place and living together in peace and harmony. But … is it enough? There’s always new stuff coming up. There’s a whole Consortium required just to keep track of the stuff which didn’t make the original cut or 6.

Unicode seems pretty simple: lots and lots of glyphs, stick them end on end, hurrah, you’re multilingual. Of course, there’s some details there around which end is which for example, and there’s Combining Characters and normalization … it’s not as simple as it appears.

And there’s something like 100,000 unicode codepoints.. You probably have several nice fonts available covering ASCII. Most of those probably cover Latin-1. Most of those don’t cover much else. Including, for example, Turkish dotless i. If you’ve typeset a nice looking paragraph which just happens to have one of those in it, it’s going to stıck out like a sore thumb.

(I’m haven’t mentioned Emoji, and I’m not going to again.)

Omnicode says: let’s do away with all of that. A glyph is a glyph: a series of strokes within a bounding box. Worrying about what that glyph means is not the job of a rendering system. So instead, Omnicode documents are just a series of glyphs, each of which contains all the information required to render it. There’s no need for a big standard mapping of code points to glyphs: if you want a new glyph, just make it up.

Each Omnicode glyph consists of a series of strokes. For example, an English ‘j’ would be represented by a straight line, a curved line and a dot. These wouldn’t be stored as bitmaps, but rather as points constructing splines in a very simple encoding scheme.

A typical ASCII letter might need a dozen or so bytes to encode, while more intricate characters such as ‘纖’ require a finer grid and more strokes and will end up with a much longer encoding. But then again they encode more information too. A standard translation table from ASCII (and swathes of Unicode) to Omnicode makes it possible to translate documents between the two.

To a first approximation, Unicode is a mapping of code points to glyphs. If you consider a page of text as an image, this is a good way to compress that image: look for the repeating glyphs and factor them out. Give the most common ones the shortest representations, don’t worry too much about the less common ones. It’s a great way to compress things, but to be efficient it relies on a dictionary to translate your encoded symbols back into their source: in the case of text that dictionary is the Unicode standard, plus a font or two to turn the logical characters back into pixels.

The compression algorithms used by ‘Zip’ and so on don’t need a dictionary though, and can compress Omnicode text just fine by detecting the frequently used patterns such as the standard ASCII characters.

Omnicode standard characters are childish and blocky, because they seek to express the minimal representation of what a letter is. To make them look nice, we need fonts. 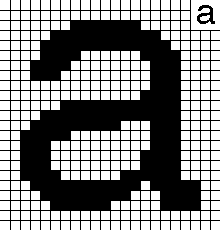 In Omnicode, a font isn’t a lookup table from code point to strokes: it is instead a transformer from ugly ‘standard’ strokes to nicer looking ones. Extra strokes can be added at this point for serifs, alternative forms, etc. For example, a font might look for a standard Omnicode circle-and-stick ‘a’ and replace it with a classic Helvetica ‘a’, and so on for all the other letters it knows about, using a simple Finite State Machine to replace bytes in a stream. Glyphs it doesn’t recognise get left alone, so that if you do try to typeset an unknown character, at least it still appears instead of getting a � or similar placeholder.

A more sophisticated font would apply a series of transformations to the original glyphs: tweaking x-heights and descenders, adding serifs programmatically, looking for opportunities for ligatures. Substituing characters might still be part of the pipeline, but by using a pipeline of transformations means the font can work well even on unknown characters, so that letters from all languages can be presented, even if they’re made up by the author.

Stumbled upon some prior art, sort of: I already knew about Chinese Typewriters and keyboards which combine strokes to make characters but here’s Livermore’s Permutation Typograph which does the same thing for western languages.