QR Codes and the Great Unpleasantness

2021-06-16 architecture / www
QR Codes are suddenly everywhere ... what are they, how do they work and how can you use them effectively?

All of a sudden, QR codes are everywhere. Due to the current viral pandemic, we’re being asked to check in to venues to make contact tracing easier, and after the utter failure of Bluetooth-based automatic tracing the common mechanism seems to be QR codes.

But what are they, how do they work and how can you use them effectively?

Kept in the Dark and Fed Bullshit

Several years ago I worked on a project for a large agricultural client, a producer of mushrooms. Mushrooms are fascinating things in their own right but this project was all about the logistics of mushroom delivery: how to get the right pallet of mushrooms to the right place at the right time.

In this particular project, there was a divide between production facilities and a separate, SAP ERP system. Palettes were produced in one system but warehousing was handled in the other. One option would have been to implement some kind of EDI process between the systems, but initial investigations showed that this was error prone due to manual interventions in the process: the data coming out of the production system wasn’t always correct.

We worked around this with QR Codes. Every pallet produced got a sticker containing human readable information about that pallet, and a QR code encoding the same information. That information included a serial number to track the individual pallet, but also lots of information about the product on the pallet: what it was, how much there was, date and time of production, etc. The system for producing stock was separate from the ERP system, but when a new pallet was scanned, the QR code contained enough information to import it into the ERP system. So in effect, we were doing EDI but over barcodes rather than wires.

This project took about 2 years to roll out around Australia and I learned rather a lot about using barcodes in the field, so this article attempts to summarize this.

What is a QR code?

A QR Code is a 2 dimensional barcode which encodes a string of characters in a way which is easy to scan automatically. There’s built in error checking and correction, and scanning software is able to correct for rotation (scanning it upside down) and skew (scanning from an angle).

I’m not going to go into symbols, modules, etc here: there’s plenty on that Wikipedia page, but the most important things to consider are:

Like with a lot of barcodes, there are various encodings available:

Larger encodings need more bits per symbol, so a QR code which sticks to alphanumeric encoding only needs 68% of the dots of one which encodes the same length of message using a binary encoding for example.

Additionally, QR codes can be printed with varying levels of error correction. Error correction means that if a few of the little black-or-white squares are misread (perhaps because of some dirt, or a reflection, or whatever) the symbol as a whole can still be correctly read.

Errors which can’t be corrected can still often be detected, which is why sometimes you think you’ve scanned the code and it just … doesn’t.

The number of dots in a QR code varies depending on the amount of information it has to encode. A larger encoding, more error correction or a longer message will all need more dots which means either the barcode gets bigger or the dots get smaller.

Not all QR codes are URLs, but it’s a pretty common application.

If you encode something which looks like a URL, most phones will scan it and jump to that website. Conveniently, the first bits of URLs are not case sensitive so you can often use Alphanumeric encoding if you plan your URLs right.

The following guidelines are to help get the best possible scanning experience. You may have to bend or break some of them for your application, but the closer you stick to optimal scanning to better the result you’re going to get.

The higher contrast the better. QR codes are best printing in black and white, although they scan okay so long as there’s a large amount of contrast: you can get away with a dark blue foreground or a beige background for example. You can’t invert the colours though.

When placing codes, consider lighting too: you want them to be well lit, but to make sure the user’s camera doesn’t cast a shadow on the code which may confuse scanning.

Avoid shiny stock or lamination which may cause reflections to obscure parts of the code.

QR codes can be printed at any size, subject to the limits of your printer and your real estate, but the camera you’re using to scan them has some limitations too. Phone cameras don’t generally focus well at very close distances, so if you print your codes too small you might have trouble scanning them.

For a typical phone camera, you want the code to be taking up a good amount of the screen when the phone is 20cm or so from the page, so at least 70mm across.

QR codes don’t scan well on curved surfaces such as cylinders or t-shirts. You can reduce the amount of curvature by making the code a bit smaller.

If you can, place the QR code so that it can be scanned face-on, with a minimum of skew. While QR code libraries can correct some skew, they have their limits and the easier you make it for the software the more consistent the results.

QR code standards call for a white border around the code, three times the width of a single QR code pixel. I know your graphic design people won’t like it, but do it anyway, or at the very least keep any interference in this area to the palest of colours.

And don’t even think about printing a logo in the middle or something. Sure, people do it, but you’re relying on the error correction to fix it and that’s inherently degrading the quality of your error correction.

I’ve been meaning to write this up for about a year now, and every time I go to do so I think the whole thing is just about over, but it isn’t, and we’re going to have to think about contact tracing for some time yet.

Here in Victoria, the typical contact tracing QR code is used with the Service Victoria phone application. The code itself is quite huge, but there’s a six digit code under the QR code which gives you a pretty good idea of how few symbols would actually be needed.

For example, here’s a Service Vic QR code I found on the web: 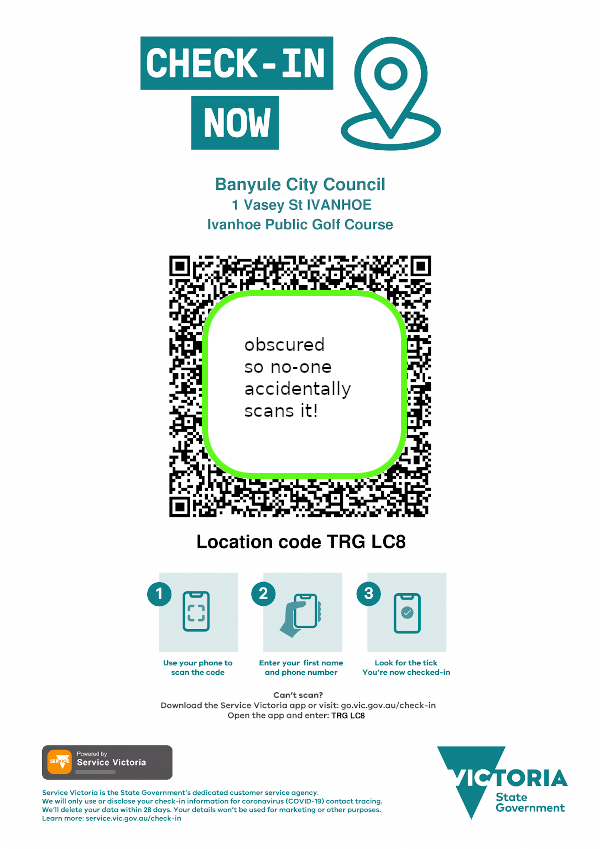 It’s pretty huge, and as a result not that easy to scan. The code itself encodes the string:

That “metadata” nonsense is actually another encoding: a thing called a JWT or “JSON Web Token”, which is a way of wrapping up a payload and securely signing it.

The “payload” of the JWT is in turn a JSON document:

This is some vast overkill. We know that locations have six alphanumeric digit codes you can enter in by hand if the barcode doesn’t scan, so there’s no need to include 128-bit UUIDs, location names, another URL.

We don’t need a secure HMAC signature or the exact second the barcode was created or a 50 year expiry timestamp either: what scenario are we protecting against here?

Okay, so what would I do differently?

As an example, the following QR code encodes HTTPS://EXAMPLE.COM/QR/ABCDEF at the highest error correction level. That’s all that is actually needed to provide a registration service, and would be much easier to print and scan than the behemoth Service Victoria QR codes: 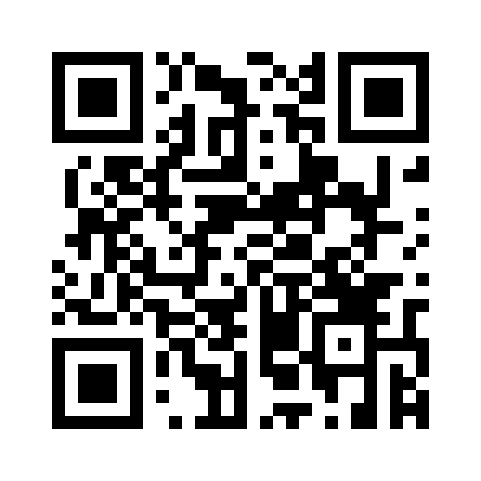 So apparently this got famous largely because I had a better pull-quote and used the word “behemoth”.

To quickly address some immediate feedback:

A government spokeswoman said the government used the same QR system as NSW. “Our QR code system uses complex codes to provide high-level security and prevent fraud, with users directed to an app rather than a simple website, allowing fake QR codes to be identified before users are taken to other sites,” she said.

She pointed to the arrest of a man in South Australia for allegedly placing fake QR codes in businesses.

This is a really interesting one. If you printed up a fake QR code going to a fake registration website, you could collect some personal information under false pretences. Probably not a lot, but it’s not a good look. 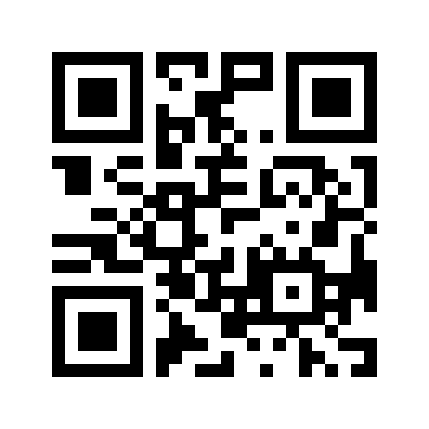 It’s still possible that people could be fooled by a QR code which redirects to a website with offensive content, or which looks enough like the service vic app that people don’t notice, but this probably isn’t a problem you can fix: the problem is with the trusting nature of phone QR scanners which jump straight to whereever they’re pointed.

This is a problem whether the code is very short or very long, you can always just pad the code with garbage if you want to make it look like a real one to the human eye.

So the other thing which has been discussed is whether the signature built into the JWT is doing anything useful. Normally, a JWT is something you issue to one client at a time, so a signature shows that this is a “real” JWT. But in this case we’re broadcasting the JWT on a poster. A copy of the JWT is no more or less “real” than the original.

Six characters at 5 bits per character (0-9 plus capitals minus 0, 1, O and I, probably) is thirty bits: about a billion combinations. There’s a few million companies registered in Australia, so if you’re just guessing codes it’s going to take you hundreds of tries to be 50% likely to hit a valid code.

Adding an extra digit or two would make this even less likely and make an HMAC unnecessary.

But couldn’t people just copy down the code and use it somewhere else?

They can still copy the QR code too, HMAC and all. I’ll hazard a guess that more people have a camera phone in their pocket than a pen.

Victor R forwarded me this blog post about checkin issues which I haven’t replicated but would be worth investigating further.

Yes, I printed a QR code for my own home office on the tiny chance that another human enters it.

The Service Vic process for printing the QR codes works well and takes less time than reading the legislation closely enough to work out whether it’s required or not, so go ahead and do it. Have a good think about how you display the code though, especially around lighting, positioning and glossy lamination.

Best of luck and let’s just hope this schemozzle is over soon.

I can’t believe this code scans, but it does …