This article will slowly evolve as I make more progress on this project! Follow mnemote on Twitter for updates.

Andrew Fisher, Andy Gelme and I are putting together a Rocket Surgery Session for BuzzConf 2017.

We’re using Water Rockets which are really just a soda water bottle using compressed air to expel water out the mouth of the bottle, causing the bottle to fly upwards.

There are quite a few parameters to adjust here: fill pressure, water volume, bottle size, fins, venturi diameter, nose cones, etc … so there’s lots of useful experiments to do!

My part in this is to sort out the telemetry hardware and software. By getting real-time telemetry data from the rockets, we can get immediate feedback on acceleration profiles and modify the rockets in the field.

The rockets aren’t big: 1.25 or 2 liter soda water bottles. And they don’t have all that much lift capacity. So our telemetry computer has to be small and light.

There’s many possible platforms, but I’ve been working a lot recently with the Espressif ESP32, a tiny chip which packs a reasonably powerful 32-bit CPU, RAM, Flash and a 2.4GHz radio into a package the size of your thumbnail. Even better, it can run MicroPython.

I put together a quick prototype for BuzzConf Nights out of stuff I had lying around: there’s a Sparkfun ESP32 Thing, a GY521 / MPU-6050 6DOF Accelerometer / Gyrometer and a 180mAh RC heli LiPo cell. 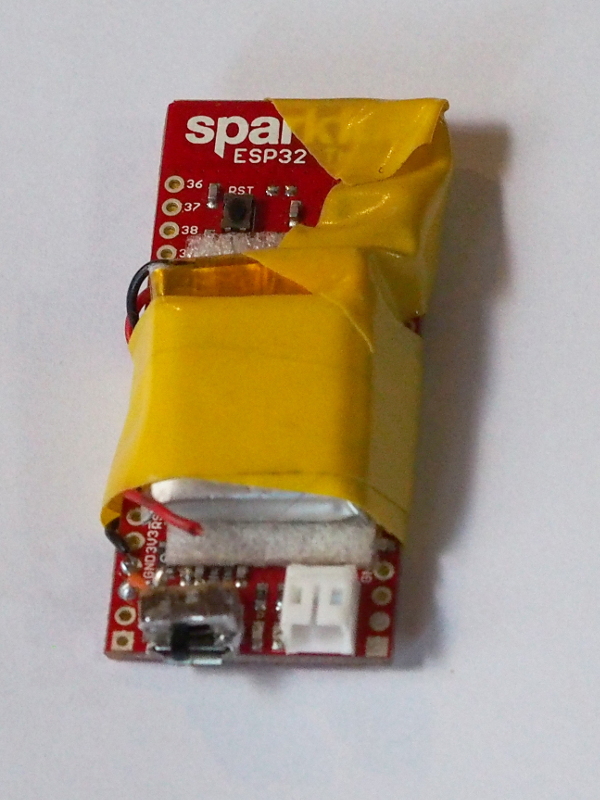 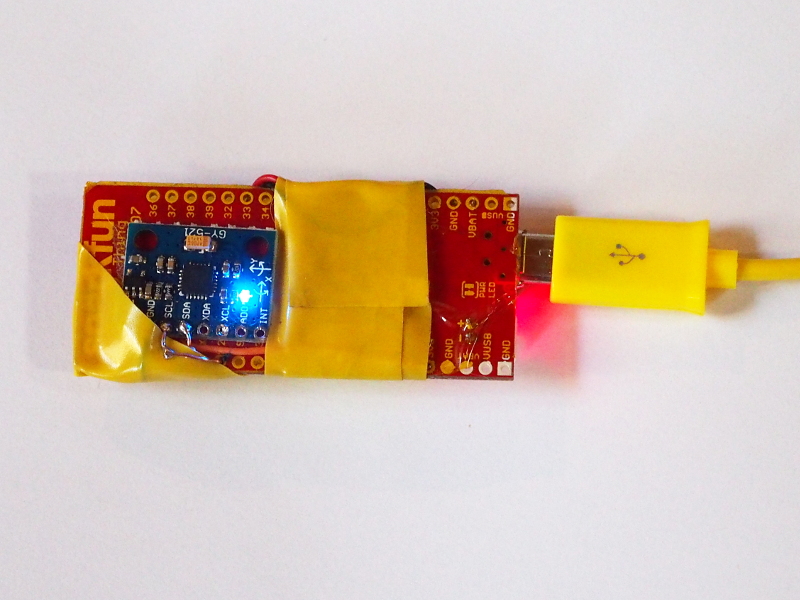 Also some foam, tape, a tennis ball (new) and a pizza box (used). The end result was this: 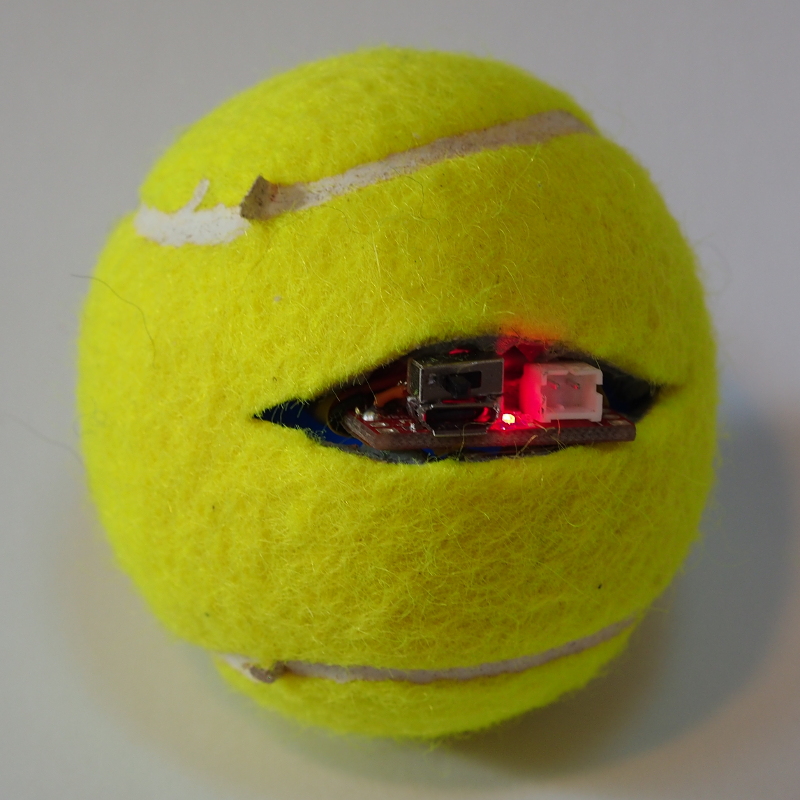 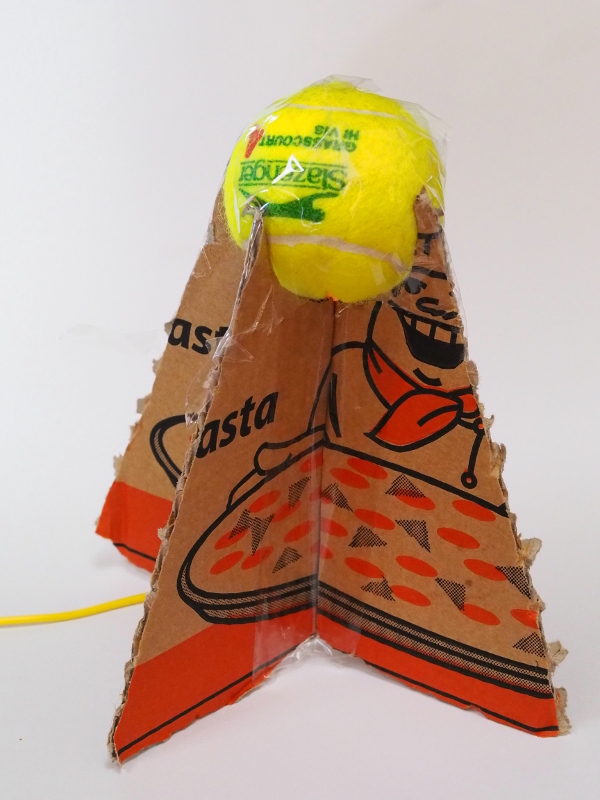 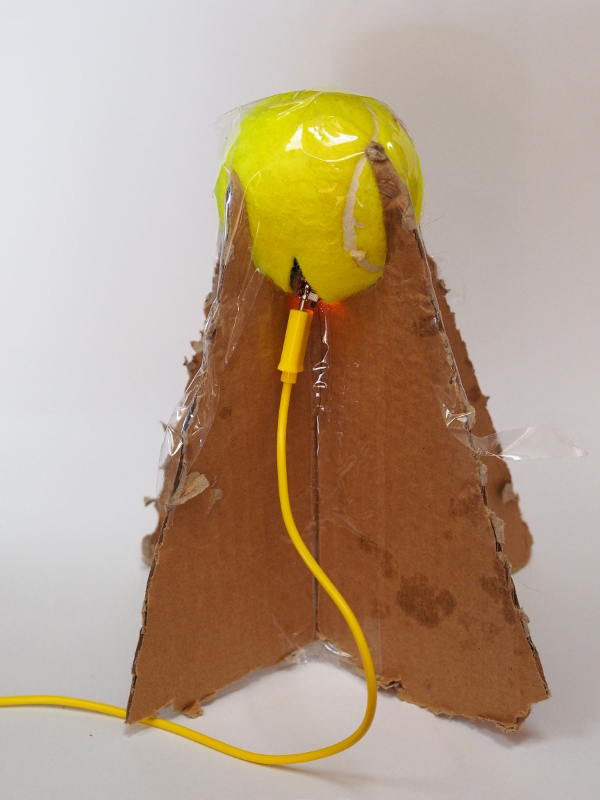 It’s not pretty, but it is easy to throw and the fins cause it to flip over nicely at apogee so it should behave quite a lot like the real thing. A quick test run showed that the telemetry package ran for over an hour on the battery, even with the LEDs which came with the modules still in place.

A small piece of MicroPython code is enough to connect the device to a public MQTT server and start logging data:

It’s not much of a thing, but it’s enough to see some interesting things about the flight of our cardboard missile. Here’s some data I captured at home using the prototype, although using my own local MQTT server (Mosquitto) instead of transmitting all the data over the Internet and back, and a slightly higher capture rate … 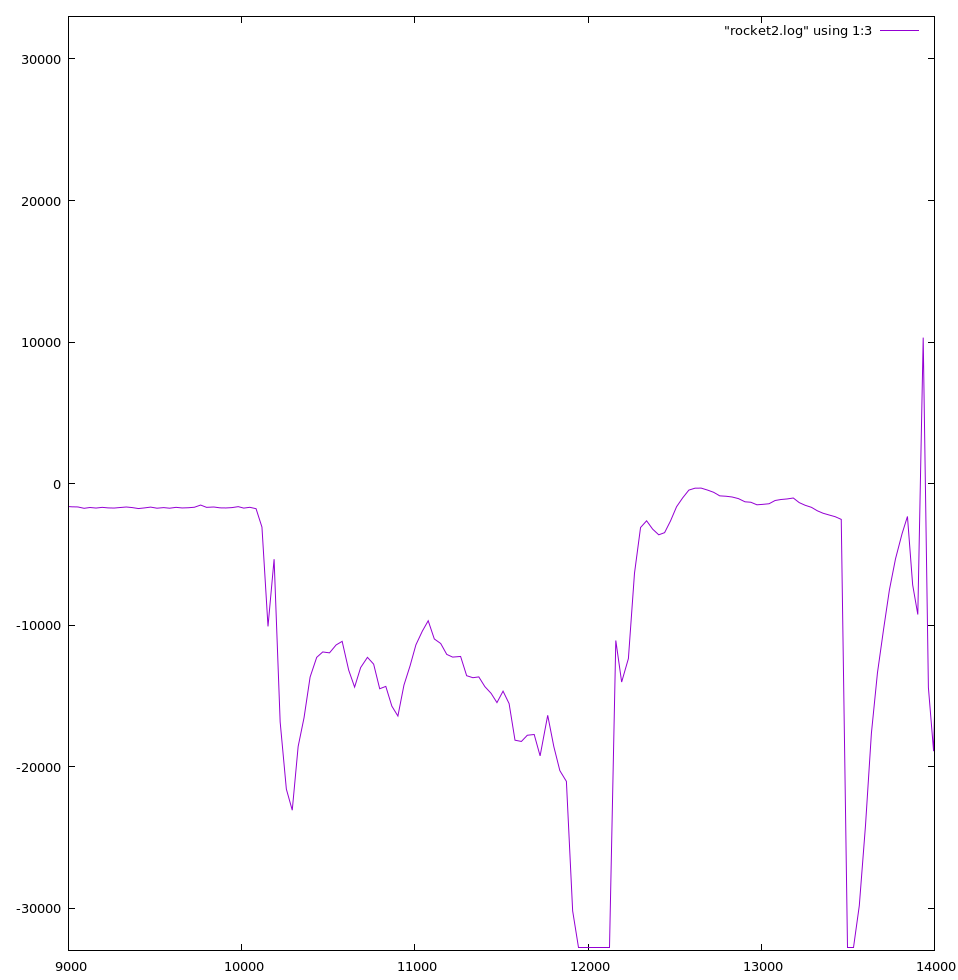 The graph isn’t all that clear, but I think that’s showing the rocket lying on its side on the floor (until 10 seconds), then getting picked up and thrown (around 12 seconds), a brief free fall period around 13 seconds and then a landing and bounce.

After this not terribly auspicious start, one of the battery wires broke off. In any case, this is just raw data and I need to look at the more advanced supersampling features.

As it turns out, the board I used is just a bit too large to fit inside a tennis ball, so I’m going to use a slightly smaller board, the ESPea32. This doesn’t have the battery management on board, but there’s a matching ESPea Battery Shield. It feels weird to snap a brand new board in half, but here we go … 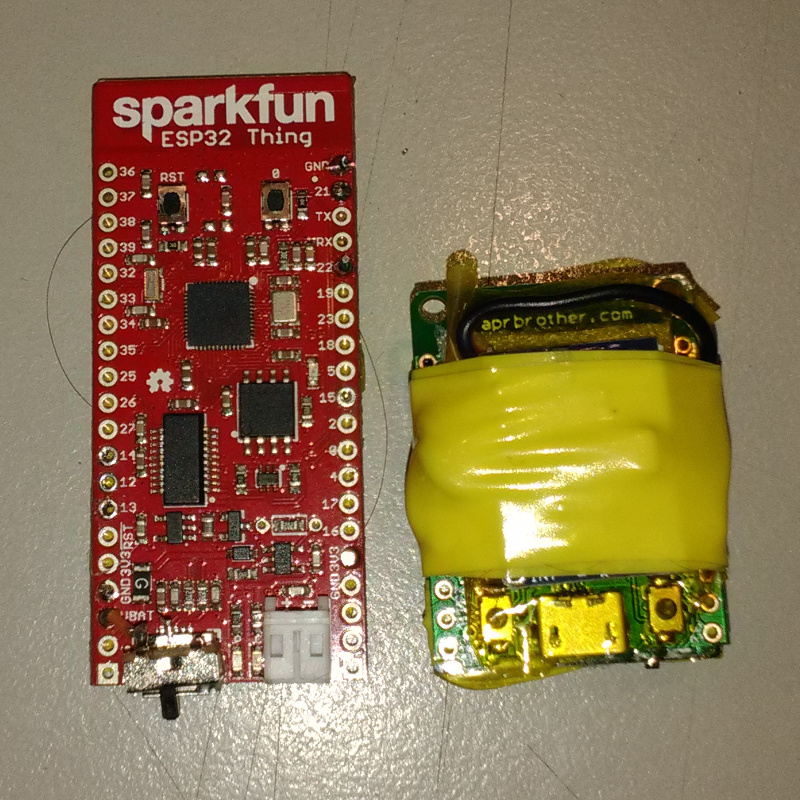 As well as the main board and the battery shield, there’s the same accelerometer module and 180mAh battery as before, and some packing foam, kapton tape, electrical tape, double sided tape … all up it weighs about 15 grams, which is plenty light enough, and because it is a compact little hamburger it will fit inside my tennis ball easily enough. 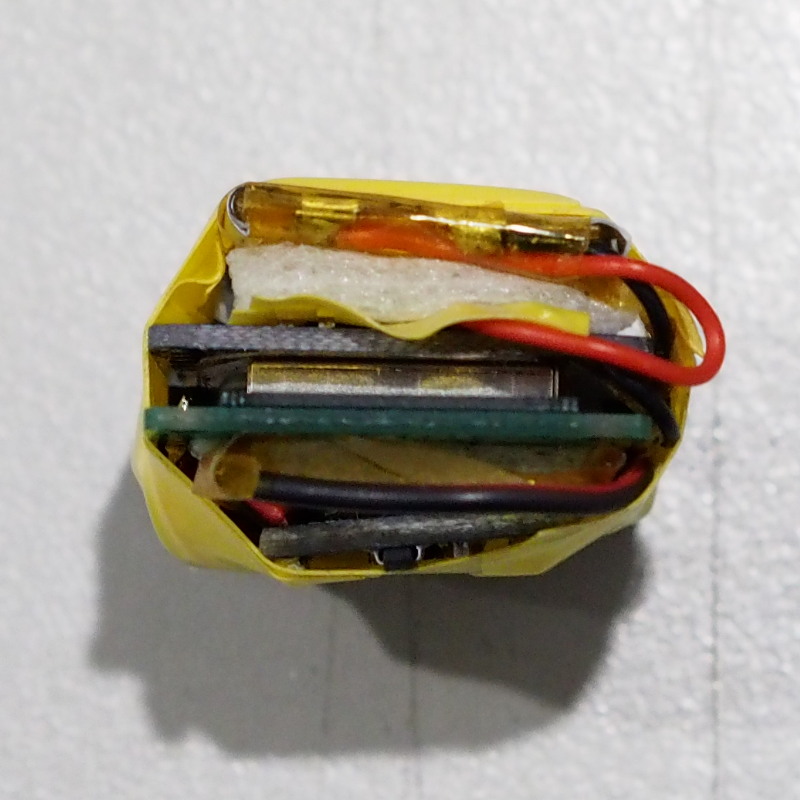 By replacing the existing 2.2kΩ RPROG resistor with a 10kΩ one, the charge rate is dropped from about 450mA to 100mA. Desoldering the tiny SMD resistor and replacing it with an enormous through-hole one was a bit hairy, but seems to have worked. The resistor leg is soldered directly to pin 5 of the regulator and to the original resistor pad to try and give it more mechanical strength. With this modification, the charging temperature is much more sensible. 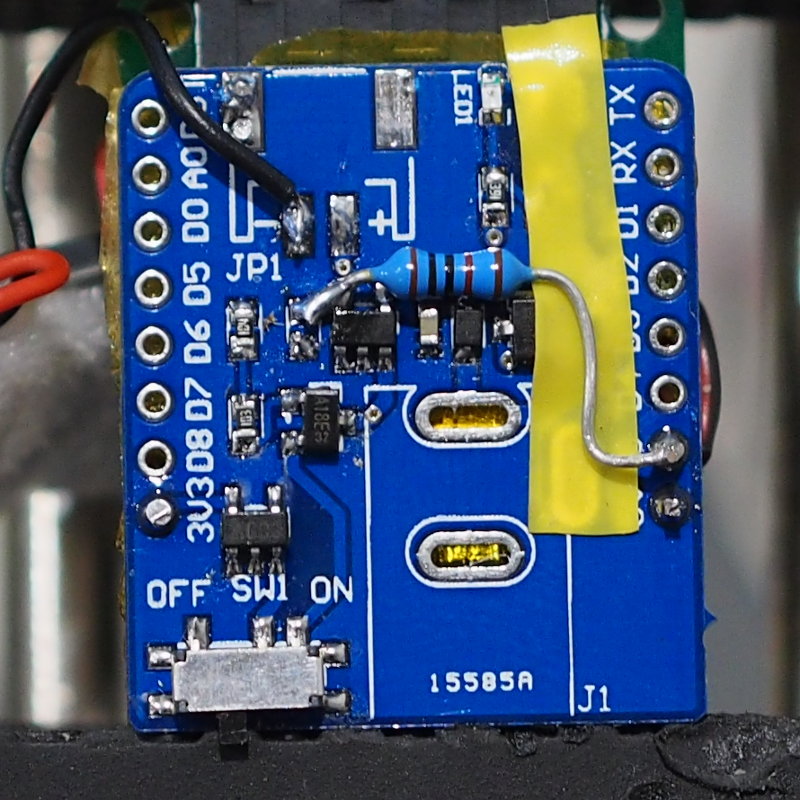 I’ve switched to sending ESP-Now over 802.11 LR and it seems to be working really well … running flat out it’s transmitting a frame about every 5.5 ms … and the 180mAh battery manages about 17 minutes of that before browning out and bouncing.

(Note: this code uses a library from a PR which hasn’t been merged yet … I need to translate it to the new repo. See MicroPython ESP-Now PR)

Another ESP32 can receive the ESP-Now datagrams over 802.11 LR and forward them to the campsite MQTT server via regular 802.11 or even wired Ethernet

At the moment, this just grabs the broadcast packets and prints them. At 115200 baud the UART can just barely keep up with the data rate, so we end up losing ~15% of frames but that’s okay, this is not the long term solution:

I’m working on pull requests to add these features to MicroPython so watch this space!

(There’s also Raw 802.11 … so I could still skip the ground control bit if it’s too much of a pain in the butt … but I think having the extra range from the LR will make it worthwhile …)

I’ve also got on order a slightly more sophisticated IMU, the MPU-9250.

This is available on a module along with a BMP280 Barometric Pressure Sensor, which should give us a pretty accurate altitude estimate as well.

Ideally, I’d like these devices to be based on an WROOM32 module soldered directly to a little board, with the IMU module(s) soldered directly as well, and so on. But I ran out of time to make boards, so instead we have some hand soldering to do. Fortunately, there’s a module GY-91 which has both a MPU-9250 and a BMP280 on the same module, simplifying the soldering.

And the LoLin32-Lite is a nice little module which combines an ESP32 with battery management. By a happy coincidence, they’re a nice fit with just a four pin header between them. Additionally, I found a Tiny LiPo at HobbyKing which is just the right size to backpack onto a LoLin module (sadly it’s battery connector is backwards. What? Why? Never mind, easily swapped). With a capacity of 200mAh and a max charge rate of 2C … well, the charge controller is meant to charge at around 500mAh but unlike with the previous LiPos nothing gets warm so I figure we’re okay.

The aim is to produce about 10 of these telemetry devices: we want to have multiple rockets to experiment with and some spares on hand, plus I think it’d be fun to dangle one off a kite like a very low altitude Statite

It’s very cheap to do a run of 10 small PCBs these days, so I’ll have to get to grips with PCB design software. I’m going to avoid dealing with the tiny packages directly by soldering modules to the PCB rather than trying to use the sensors directly. This should mean I can get away with a fairly sparse 2 layer board.

I’m also a bit leery of LiPo batteries: I dunno, they seem a bit explodey at the best of times, and being fired into the air atop a jet of water may not agree with them. I bought some AAAA cell batteries on Ebay so I’ll try them out. Annoyingly, none of the 9V batteries I levered open contained LR61 cells.

Well, BuzzConf time came and despite really crappy weather the rocket workshop was a pretty big success. We got lots of engagement, several groups of rocket builders and quite a few flights. We learned a lot about our telemetry and our launch platform, and I think we’re all eager to have another go.

The software used is all on github

A couple of photos from me: 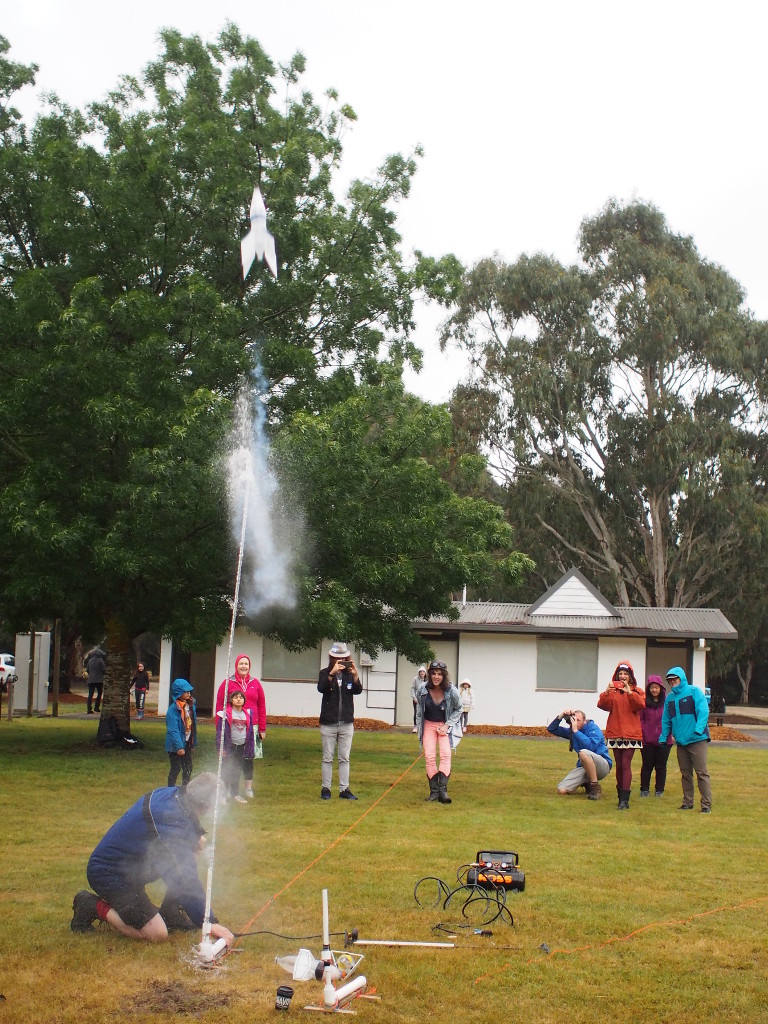 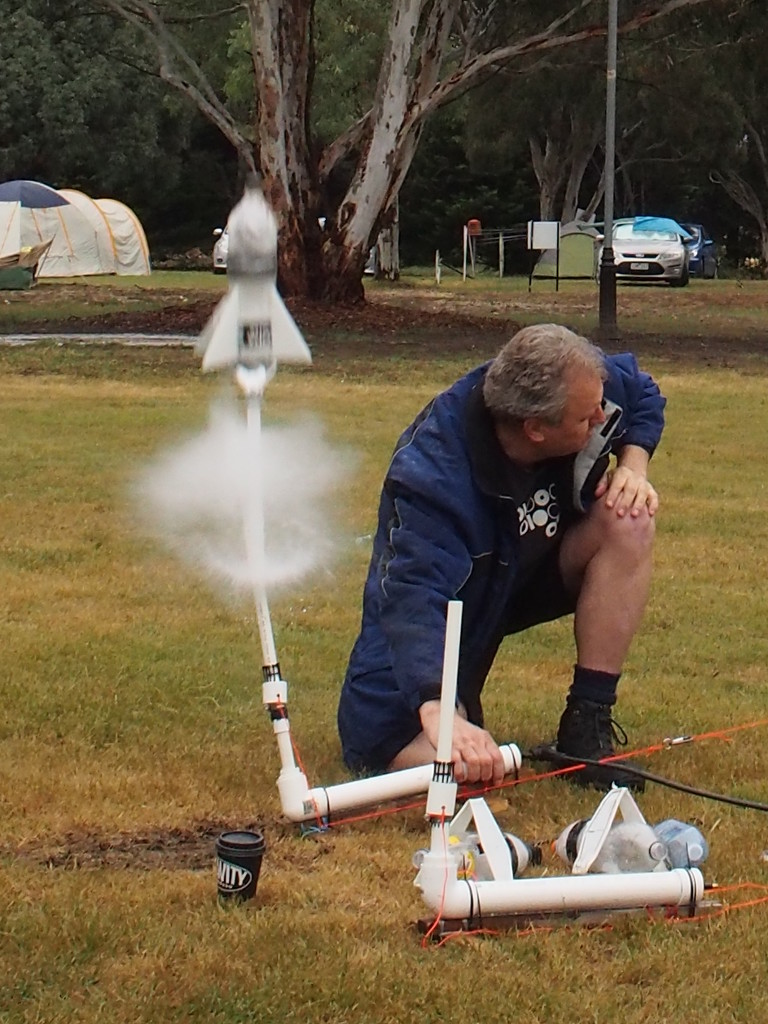 The shape of the exhaust is very interesting. I’d love to get some slow-mo video of this so we could see when each of those different kinds of spray and mist are produced. 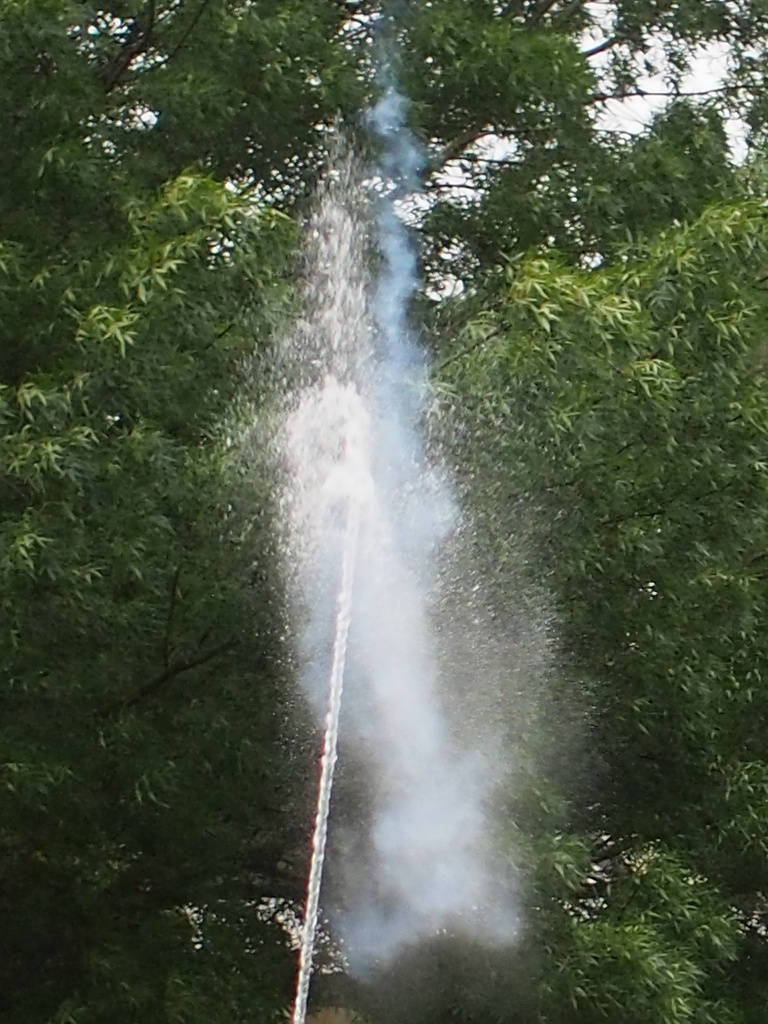 The telemetry worked well some of the time :-) 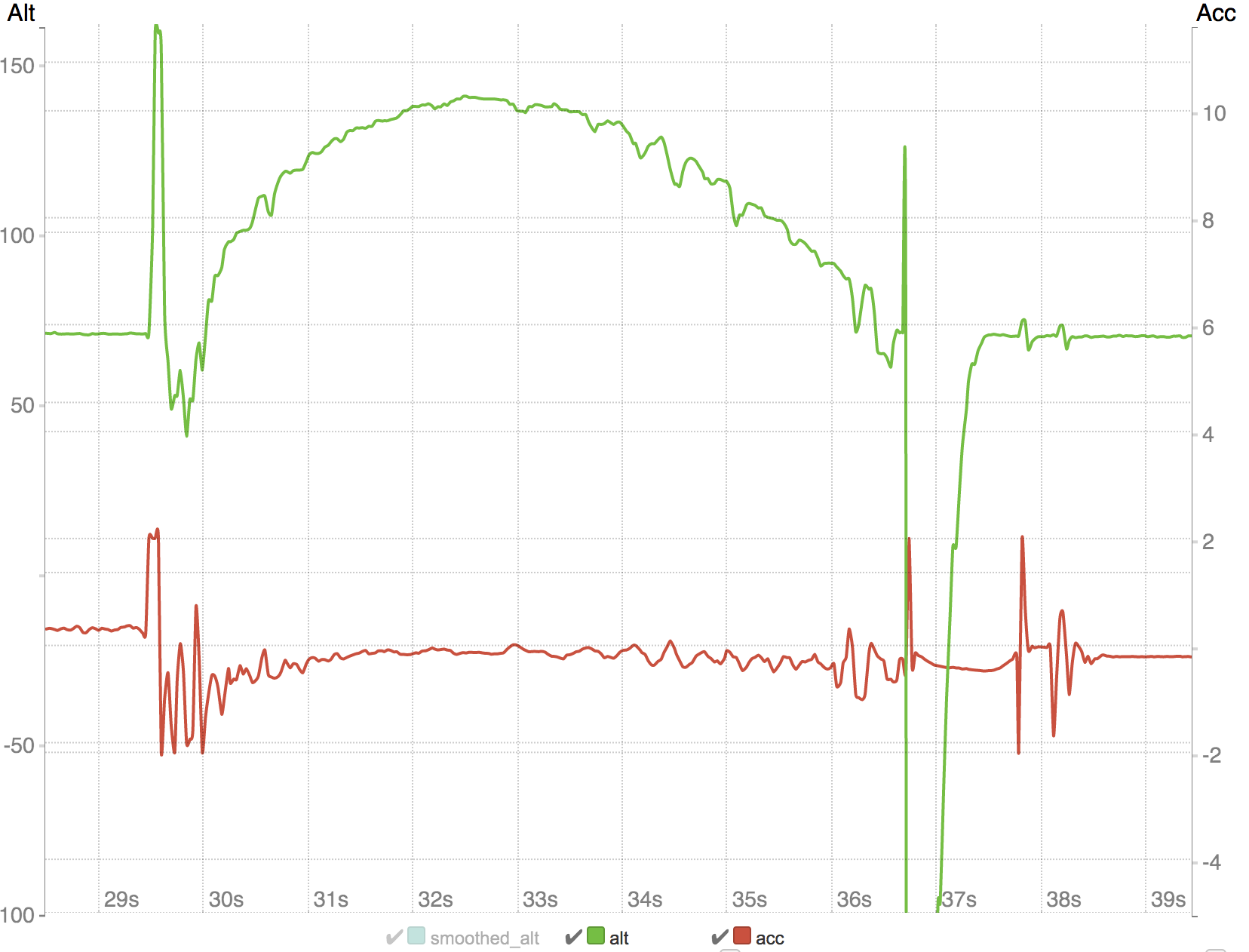 (chart thanks to Andrew Fisher)

Some other people’s videos

Really, we missed an opportunity by not having every rocket launch tweet at apogee!