Virtual Localization is a technique for Mesh Network routing. It tries to make it easy to route packets across the mesh by assigning each node a “Virtual Location”, which can then be used for Greedy Forwarding. It is a fully distributed algorithm … no one node holds the whole map of the network, the map is spread across all nodes with each node having a small map of its immediate surroundings.

I’ve also written some papers on Virtual Localization, but this post is an attempt to summarize what I’m doing and talk about why.

There’s been lots of work along these lines over the years, almost all of which attempts to map out the network by using triangulation of the distances between nodes. Mostly, people attempt to measure distance by looking at the signal attenuation: theoretically, radio signals attenuate as 1/r2.

However, in practice there are all sorts of measurement errors introduced by reflection and absorbtion by your surroundings, including buildings, furniture, people, etc, and so distance measurement is often inaccurate, making triangulation rather fraught.

Virtual Localization abandons this attempt and instead uses a much simpler metric: either two nodes can communicate or they can’t. This is very easy to measure … if each node sends a beacon listing all the nodes whose beacons it can hear, every node gets to know who its 1-neighbours (direct neighbours) and 2-neighbours (neighbours’ neighours) are.

Without distance information, our Virtual Locations will never correspond that closely to the real location of the nodes. However, my research has shown that this is a blessing in disguise … the Virtual map is actually better for greedy forwarding than the real one! Also, by embedding the virtual locations in a higher dimensional space than the real locations, we can introduce more degrees of freedom in which to converge, leading to a better result.

So I recently reworked my mesh network simulator to merge the “hardware” code in with the “simulator” code … so that they can share the implementation of the actual Virtual Localization algorithm. There’s some new VRML files based on simulation over at https://mesh.zoic.org/ … the idea is to eventually test the software on hardware nodes. 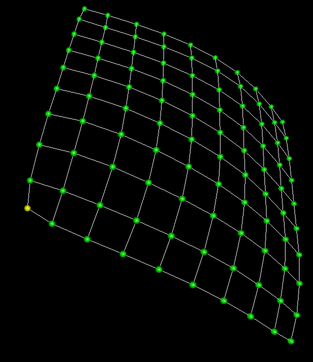