When you push a string against a fret, the distance between the fret and the saddle determines the note. Making the string half as long should double the frequency which means a note one octave higher, but it’s not a perfectly linear relationship because of string diameter, density and tension. The amount by which its off is known as the instrument’s intonation and it’s never quite perfect on all frets of all strings all the time.

Thankfully, most people are only sensitive to pitch errors above about 6 cents (6% of a semitone, basically) so we don’t have to get it utterly precise to sound good.

To a first approximation, for a typical acoustic guitar, you can improve the intonation by moving the saddle back a millimeter or so from where you might expect from the scale length, and angling it slightly to make the bass strings a smidge longer again.
This process is called Compensation.

For more precision, you need a Compensation Calculator (the units are all in inches, sorry) and/or careful experimentation.

Then you carve the saddle in such a way that the point the string touches it moves back or forward a little from the center, to compensate for the intonation of each individual string.

(If you need more wriggle room you might have to recut the saddle slot but that’s a bit out of my depth, frankly.)

My little Maton Tenor Ukulele is a lovely instrument but it has a straight saddle and the intonation was a bit all over the place.

Note that ukuleles are tricky because the strings aren’t in order: the typical tuning, top to bottom, is G4 C4 E4 A4, where the G4 is between E4 and A4, so an angled straight saddle isn’t going to be good anyway.

At least the notes are very close together, so compensation distances vary much less than, for example, a guitar.

You can see the general shape on this closeup of my Enya Tenor Ukulele (aka the Plastic Beach Ukulele). The compensated saddle means the C and E strings are just a smidge longer than the G and A strings, improving the intonation. 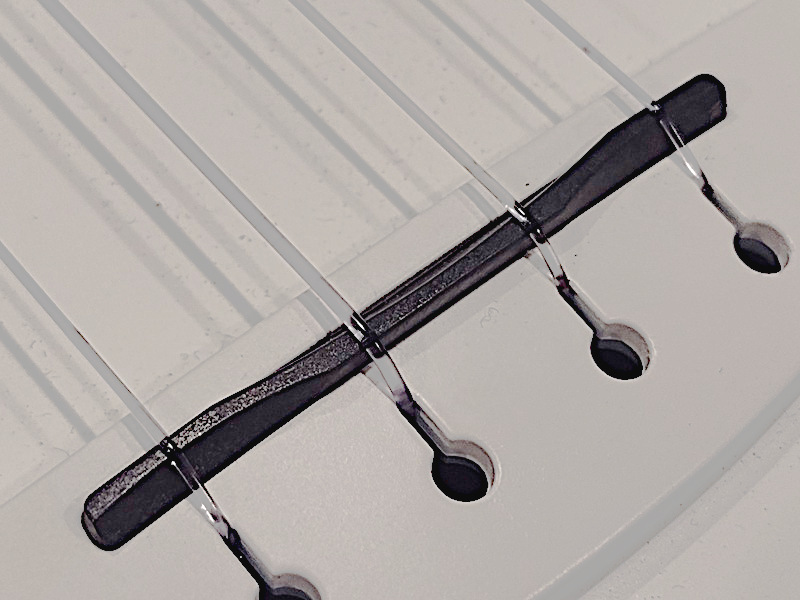 Anyway, back to the Maton. Mostly it sounds great, but a couple of chords, especially Em, are impossible to tune to sound perfect, which I think is due to the intonation.

It uses a typical 3mm thick saddle, so there’s ±1.25mm or so to play with. The stock saddle is cut straight and centered, which is what I’m calling 0.

Good quality 3mm bone blanks only cost $5 or so, but I didn’t want to ruin a whole bunch of blanks while wildly guessing at the shape I was after. So I figured I’d print one as an experiment.

I used OpenSCAD to design a part with a rectangular base to fit the saddle slot and a raised cylinder to form the rounded saddle for the strings:

OpenSCAD is a strange little language, but specifying all the measurements as variables makes it really easy to change them up later. 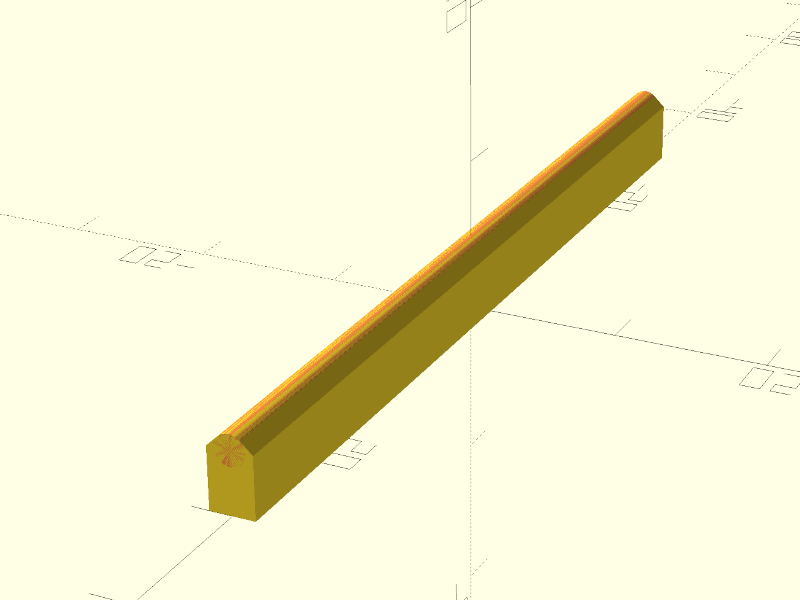 First go at a saddle model

My cheapo printer only does PLA so PLA is what it was going to be. I used Cura to slice the model at maximum resolution (0.06mm layers), a raft to avoid curling on the bottom layer, and full infill. Then sent it off to the printer via OctoPrint and in only a few minutes the saddle was ready.

To install the new saddle, I just slacked all the strings right off and pushed the old one out of the slot underneath them. Originally I’d printed the saddle 2.9mm thick but that took a little sanding to slip in nicely, so for later prints I used 2.8mm which gave a nice “light sliding fit”. Then I retuned, let the strings settle in a bit and gave it a go.

I was happily surprised by how decent the PLA saddle sounded: I’d thought this was only going to be a temporary part until I could replicate it in bone, but to my (not especially magical) ears it sounded fine.

This saddle is just perfectly straight and centered, like the stock one, so we haven’t really achieved anything yet.

Now we know the technique is usable, let’s estimate the compensation and print a new one.

I’m not a particularly sophisticated player and mostly play open chords anyway, so rather than setting up compensation on the 12th fret, I used the 5th fret for measurements.

I used a harmonic tuner app on my phone to measure intonation and take a first guess at compensation values. The results worked out something like (from memory):

Note that the intonation depends partly on things like how hard you fret the string, and the fine tuning of the note actually varies a little as it rings, and also the strings had just been disturbed when I replaced the saddle so they weren’t quite stable yet. But it’s a start.

I could just offset the saddle by, say, 1mm and that’d be an improvement. But 3D printing really makes it easy to go all in on this kind of thing, so why not make each string’s saddle have its own offset?

To do this I added an array of offsets, and changed the model to split the saddle into the right number of pieces and offset them each individually. Since they’re right next to each other they all print as one, but we can set the compensation individually. Having the little angled pieces not line up with each other looked kind of janky, so I reduced the length of the saddle cylinders to make them each their own individual mountain.

Our offsets are a bit of a stab in the dark, but that’s okay, because we’re going to print a few of these and home in on a good setting. 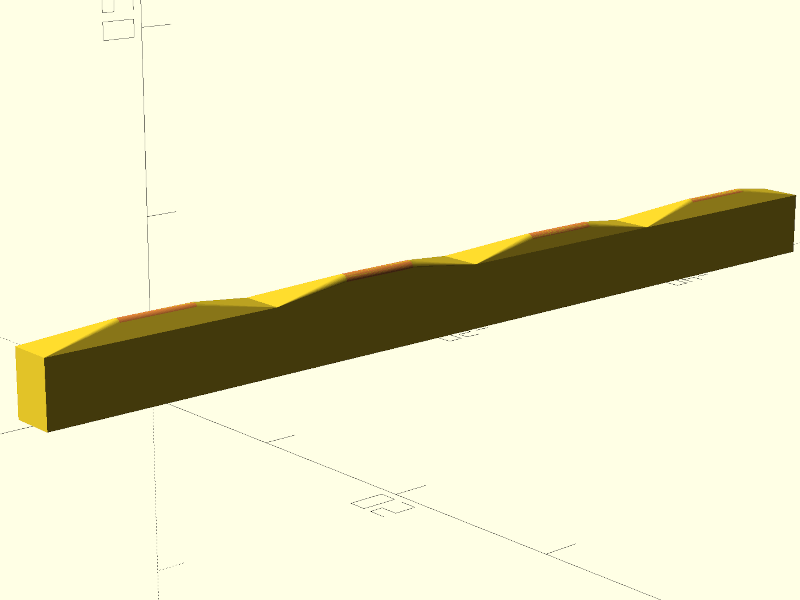 Second iteration of the saddle

This version sounds distinctly better intonated than the stock one.

The PLA doesn’t sound significantly different: maybe I need to record some “before” and “after” samples to see if I can tell, but it’s subtler than I expected.

Moving the C string back 1mm isn’t quite far enough though, I think it will need more like 1.5mm compensation. Which is problematic, because the slot is only 2.8mm wide. I really don’t want to have to recut the saddle slot, so I’m considering whether the saddle can get away with a tighter curve, or a little “flying buttress”, or whether it would be better to have it bear on the bridge in front of and behind the slot instead of at the bottom of the slot: it’s not how it is designed, but would it work? 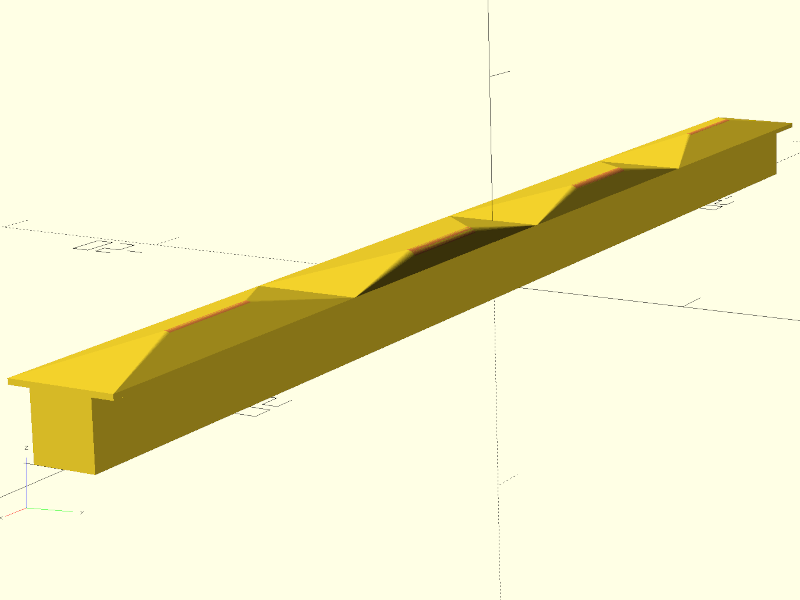 It looks ridiculous, but would it work?

I also have a banjolele, I’m considering whether it might be possible to print a whole new bridge for that!

I’ve ended up making a blank which extended over the back which kind of worked but also might be a bit too soft to hold its shape like that for too long.

The strings might be pushing into the PLA a bit too much, the tone is starting to sound a little weak too.

On the other hand, I stumped up for the paid version of Intonation Expert which is very cool and seems to think I overshot slightly and can bring the compensation back in a little so perhaps it is okay.

I’m going to order some bone blanks and see what I can do about carving them to the right shape & compare.