2020-10-25 speculation / languages
Following up on the "Programming Beyond Text Files" with some further points ...

One thing which always gets brought up when talking about visual programming languages is how fiddly they are. Nodes are dragged and dropped onto an arbitary space and the relationship between the nodes is left to the reader’s imagination.

You can buck the trend and build Flobot networks in weird S shapes but loops are disallowed and so there’s a clear hierarchy.

Perhaps it’d be a good idea to take the job of placing nodes away from the user? Much like tiling window managers, which place windows as neatly as possible without user intervention.

One possibility would be to use Force Directed Placement or Energy Minimization or similar to place nodes in “the right place”. (I’m a bit obsessed with these kids of algorithms, ever since playing with Xspringies and Graphviz as an undergrad: see also Virtual Localization)

Nodes would then automatically locate themselves between their related nodes by attraction, avoiding overlapping with other nodes by repulsion. Clever algorithms can avoid local minima and end up with a “nice” layout every time, with minimal edge crossings and no occlusions. Some kind of ‘hinting’ may be required to keep the layout stable.

But this assumes we’re trying to lay out our visual program in a static, flat page, which we have a little window into.

This sort of thing works okay for text files, which are long and skinny so you can scroll your view through them in one dimension. Scrolling through things is a lot harder in two dimensions, requiring more of a zoom out and zoom in approach, and in more dimensions or non-Euclidean spaces it’s intractable. 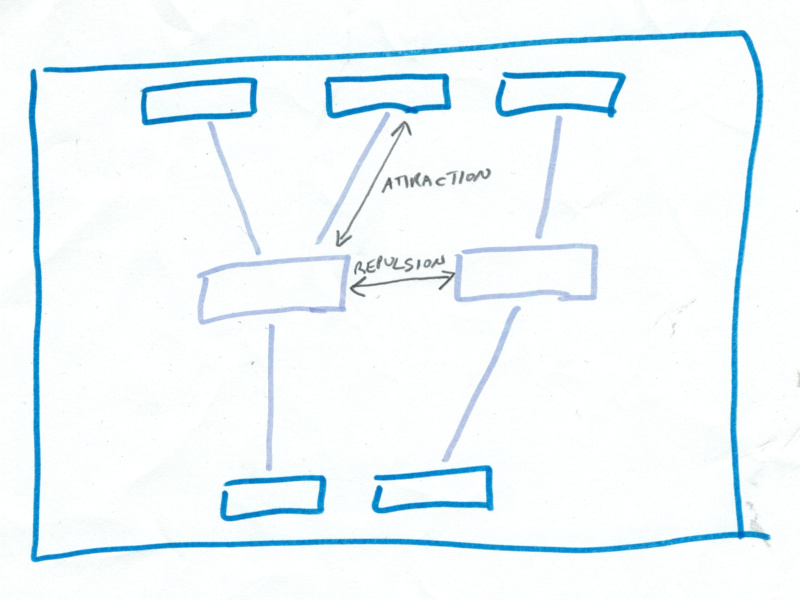 I favour an approach of having a “focus” node around which other nodes are arranged according to their relationships to the focus. Direction on the screen can indicate the nature of the relationship, with parent/child, next/previous, cause/effect, contains/contained etc mapping onto the screen direction.

As mentioned in Decoding This mapping between graph and presentation could even be dynamic: choose a different mapping depending on the work at hand.

Navigation is then done by shifting focus between nodes. Move from caller to callee and back, zoom in and out based on encapsulation. Rather than nodes existing in a static 2D presentational space, they exist in a much larger, higher dimensional mental space. 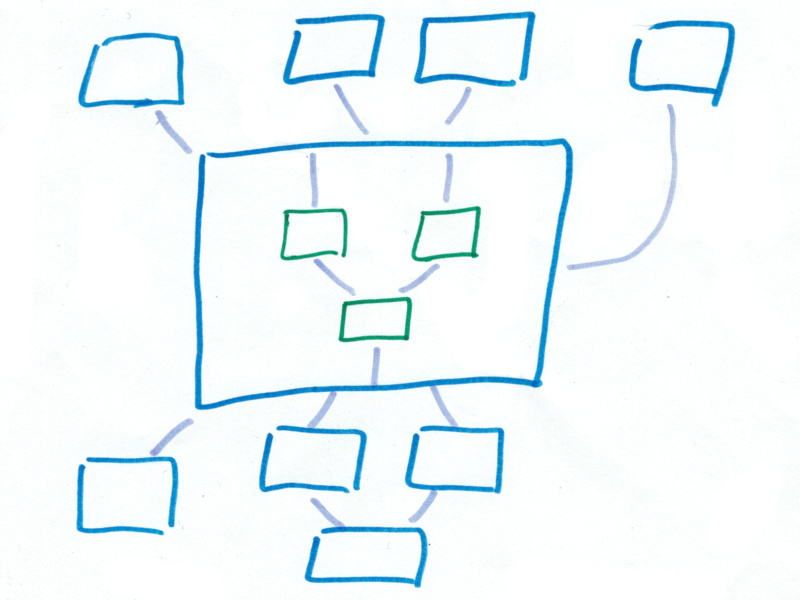