2020-09-04 micropython
Lilygo were kind enough to send me some samples of their new watches: well, wrist-mounted computers, really. Here's a look at the TTgo T-Watch 2020. 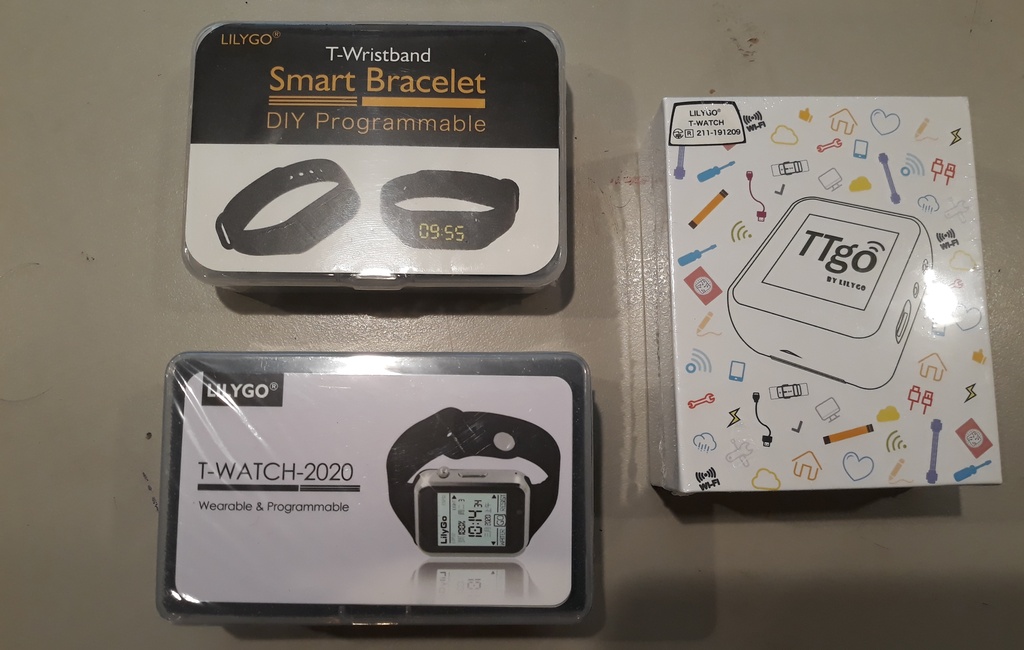 The first one I’m going to look at is the T-Watch 2020, the latest of their wristwatch devices. It’s a bit chonky, the body is 49mm x 40mm by 12.7mm thick, but the edges are round and comfortable and the black plastic back makes it seem a little less over the top.

Even though I don’t generally wear a wristwatch, it’s not so big as to feel like you’ve strapped a computer to your arm and light enough to not feel weird. 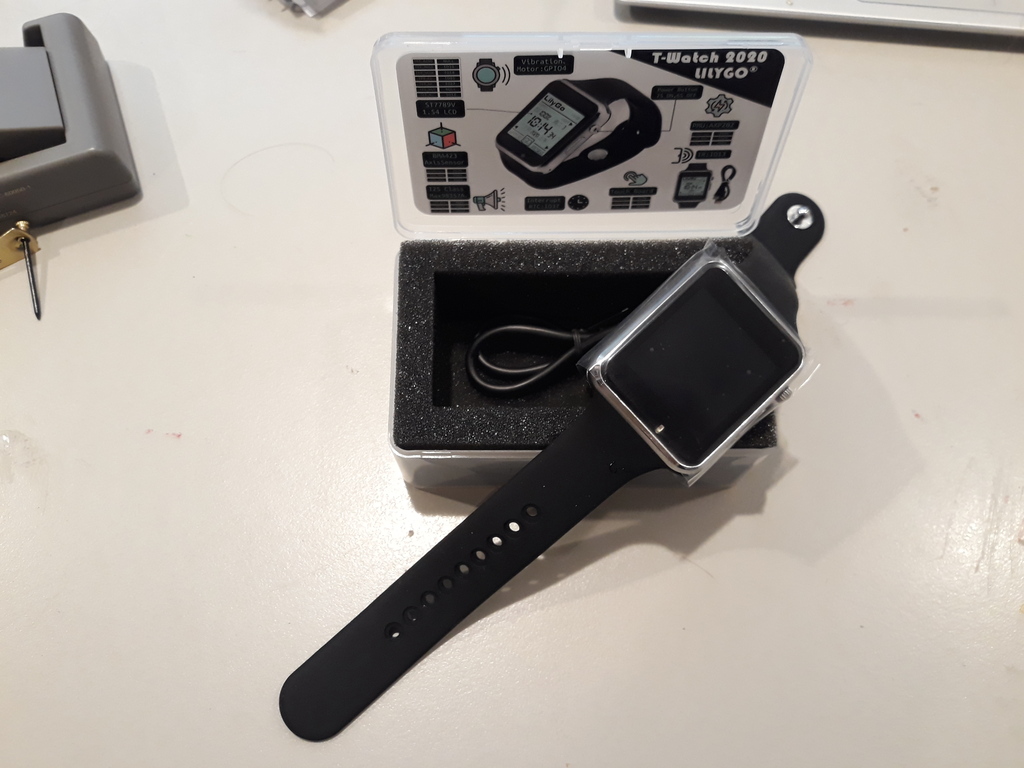 On board is an ESP32 microcontroller (specifically ESP32D0WDQ6), 16MB of flash memory and a bunch of peripherals. Under a little thumbnail-removable cover on the side is a standard MicroUSB port for charging, and attached to a standard CP210x-type UART. There’s a little cable supplied but it’s accessible enough that you can use a normal microUSB cable. 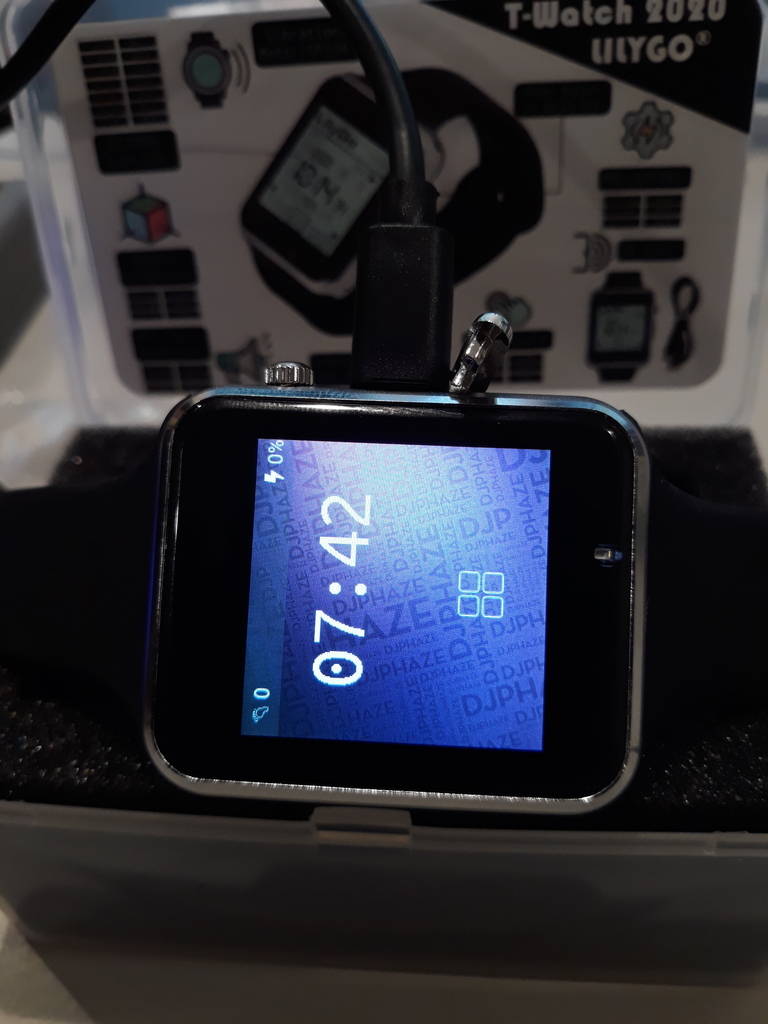 Under the back cover you can see a tiny speaker and even a removable LiIon battery! Remarkable in a device this small, please pay attention phone manufacturers! 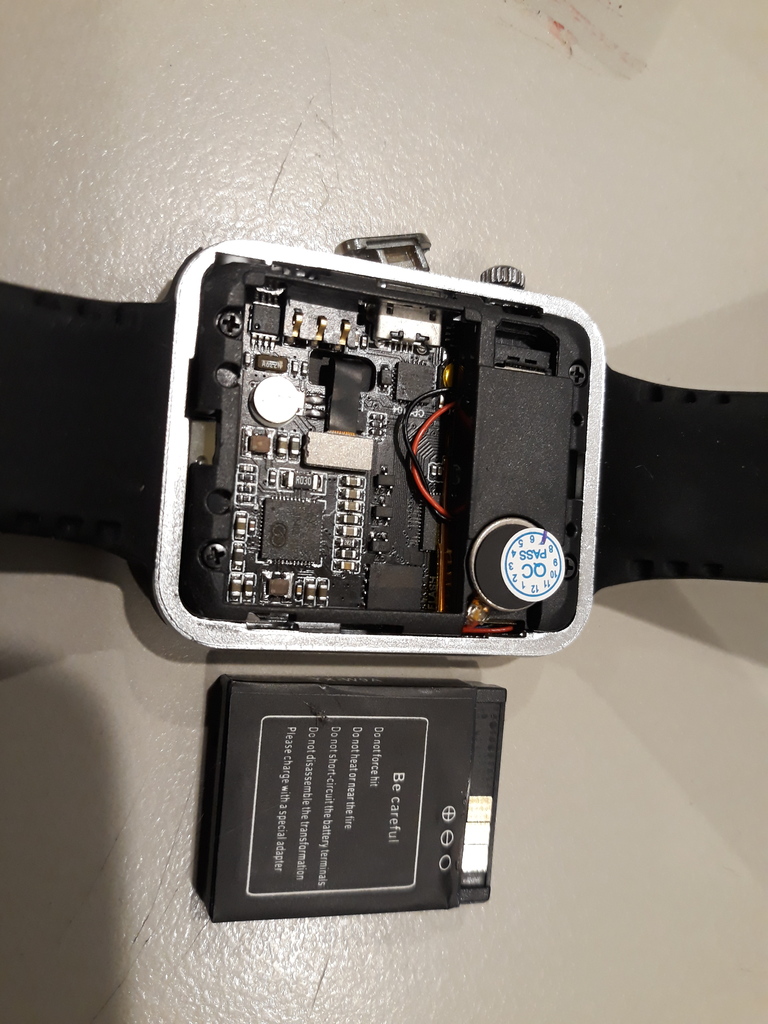 Out of the box it’s running some firmware which looks like a watch and lets you set scan WiFi and so on but I didn’t really look much more at it, because that’s not what we’re here to talk about: what’s fun about this device is that it can run MicroPython.

This trail has been blazed by y0no (en translation) and mooond but I thought I’d give it a go too.

First things first: I build the newly released MicroPython 1.13 for ESP32, plugged in the watch and flashed it the usual way.

It doesn’t do much like this: you can connect to the serial port and get a Python prompt, but that’s not very useful.

There’s a technical document for T-Watch 2020 which includes lots of great information, including peripherals and pinouts.

Starting with the most basic “proof of life”, we can see GPIO4 is attached to the vibration motor, so we can pulse that GPIO and see what happens:

Yep, that buzzes for 1 second! Can we do more?

The GPIO signal doesn’t seem to drive the motor directly, but by using a really low duty cycle and varying the PWM frequency between 5 and 30 Hz you can make a variety of different vibrations at least … potentially handy.

Likewise, GPIO12 is the display backlight: you can PWM it at 100Hz and set the background brightness with the duty cycle.

UPDATE: This only works if power to the display is on. Which is might or might not be, depending on if you’ve pulled the batteries since you first booted the device on it’s built-in firmware, or something. Anyway, it worked for me at first but then stopped working until I got down to the AXP202 bit below

It’s a bit confusing to try to work out which pin is which internally, as some of the docs are mixed up between the older, expandable watch and this current model. This pin map on github is possibly the best guide. It doesn’t list GPIO 12 though, which I’ve confirmed is a backlight pin.

This image from the website fills in some more details: 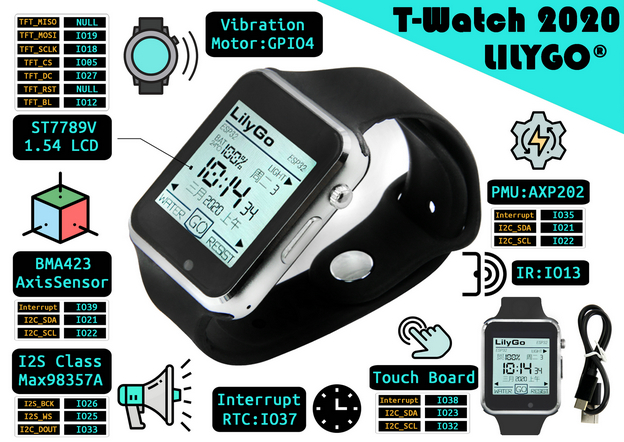 The button on the side, which looks like a little crownwheel but isn’t, is attached to Pin 36 on older watches but doesn’t seem to be attached to anything on this model, which is a bit annoying. If you hold it down for a few seconds it toggles the watch on and off though, which is handy.

There’s several I2C peripherals listed at various pins: let’s see if we can find them.

According to the sites linked above, these should be (respectively):

The simplest device we can talk to is the RTC: There’s a 45 page PCF8563 datasheet here, but the only bit we need to worry about is section 8, which explains what the I2C registers are used for.

Its so simple we don’t really need a library to get started. We can just read out registers 2, 3 and 4 over I2C to get the seconds, minutes and hours:

… it turns out that these values are in BCD, and have some spare bits besides. Correcting for that:

… we get much more sensible results:

We’re probably better off using a library for the RTC, but it’s nice to know we can talk to it directly from MicroPython if we have to!

Likewise, there’s a 101 page BMA423 Datasheet which tells us a lot about the device but at the most basic level let’s just check we’ve got the right device, turn the accelerometer on, and see what it says:

You can get a pretty clear idea how the accelerometer works just from this. There’s a lot more features to explore though, including much more sophisticated power management, motion-triggered interrupts and so on.

One chip I knew nothing about in this device was the AXP202, but it looks like it is the battery charge controller, the CPU power regulator and also used to switch other parts of the circuit on and off.

It’s programmable, which means we could, in theory, crank the CPU or battery up to too high a voltage and damage something. More to the point, if we turn the regulator which powers the ESP32 core off, there’s possibly no way to turn it back on! We really don’t want to screw this one up.

The power button on the side of the watch is attached to this chip too, that’s the “PEK” or Power Enable Key. A really long press shuts the whole watch down, shorter presses can send interrupts through to the CPU using its interrupt pin, which is hooked up to GPIO35

It also contains an accurate ADC for estimating remaining battery.

For now, all I’m going to do is turn on the display power and leave everything else alone:

Don’t forget, to actually turn the backlight on you also have to turn on GPIO12, as mentioned above. Even quite a low PWM setting is sufficient, depending on ambient light:

Getting interrupts to work is a bit of a bear: first you have to clear all interrupts, which should make GPIO35 go high. Then enable the interrupt on the falling edge of GPIO35. When you get an interrupt, you handle it and then have to clear the interrupt status bytes to 00 by setting them to FF.
I’ll add some example code for this later.

The last device on our I2C list is the FT6236 touch screen controller. The FT6236 Datasheet is terse compared to the ones we’ve seen so far, but it’s enough.

Again: this could be made a lot more sophisticated but at least we know it works.

OK, so the last remaining piece of hardware I’m going to worry about for tonight is the ST7789 display, connected to SPI2.

These are way too complicated for my usual mess-around-with-registers approach to apply but thankfully interfacing to the ST7789 is a pretty well trodden path.

I’m going to try this with this C MicroPython ST7789 driver, which gets compiled in to MicroPython. After following instructions, I hit a snag: the watch doesn’t have a reset pin for the 7789, but the driver insists on having one.

So I made a fork which doesn’t insist on a reset pin and now the following code works: 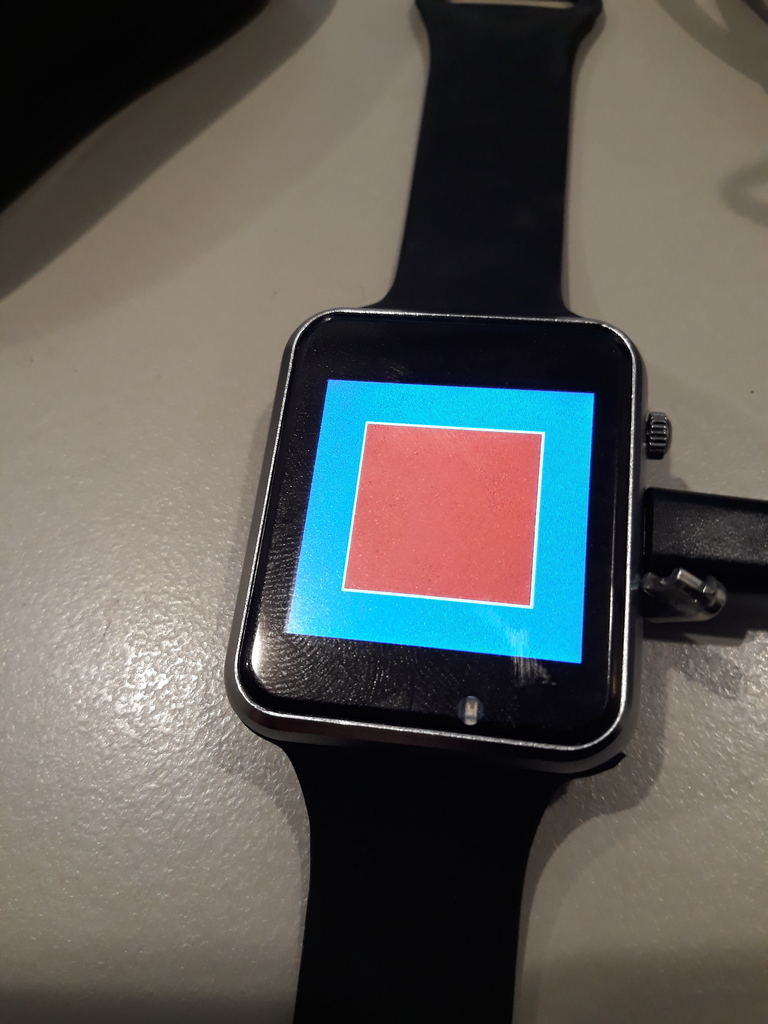 I wanted to load an image to show off the colourful display. Rather than decoding the image on the device, I figured I’d just convert the image to raw, “565” format as expected by the display and then copy it onto the watch.

565 mode packs R G and B channels into five, six and five bits respectively of a 16 bit value, written in big-endian order. I used this quickie code to do image conversion:

The display library includes code to “Blit” (copy) pixels from a buffer. The only problem is, the available RAM in MicroPython is smaller than the display! So we have to blit it in several parts. This code grabs blocks of 20 rows at a time and blits them onto the screen: 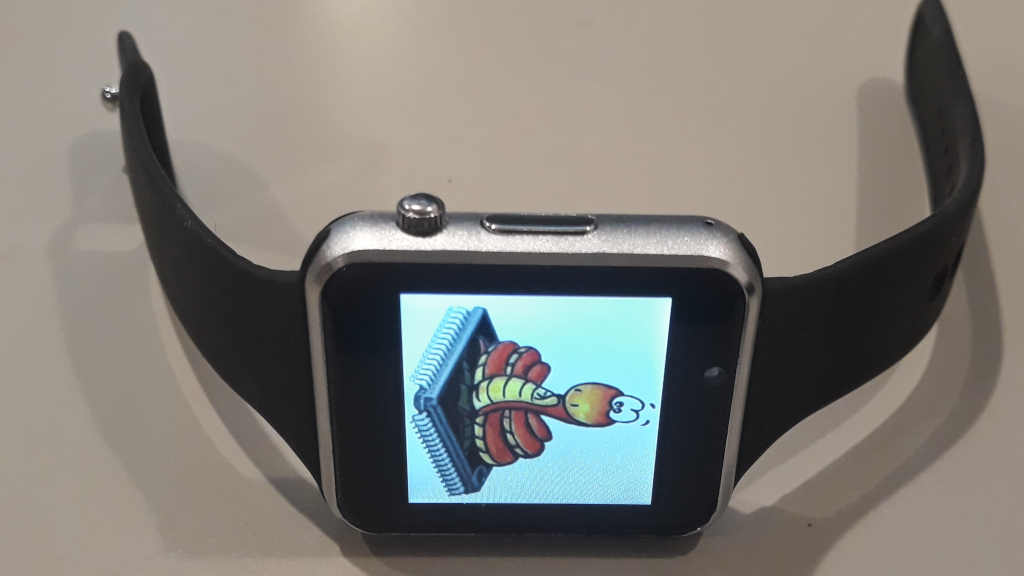 Shortly after taking this photo I noticed something interesting … the screen is upside-down! Well, compared to the other photos, anyway.

Well, I’ve made a start. It’s not much, but it’s working! So far we’ve got very basic access to:

We already know MicroPython can handle WiFi well, and now has support for Bluetooth BLE, so we now should have a networkable, remote-controllable watch!

I think the stuff above shows off one of my favourite things about MicroPython: having a REPL gives you license to just muck around with things like I2C peripherals until you get them working. It’s a much more fun way of developing than having a big design up front and a slow compile-flash-reboot cycle just to see if anything is working.

This is a pretty limited device. I mean, that’s hardly surprising, it fits on your wrist, but there’s no point beating around the bush. There’s no mic or camera, there’s no keyboard input, the touchscreen is quite small compared to my big sausage fingers. I’m not sure how much run time we’ll get out of it in MicroPython either … I have to work out a way to measure this.

So to make it useful we have to think in a limited way:

Some other weirder things just because there’s hardware: