I picked up a Guitar Hero type controller from the thrift store on impulse (it was $7). It turns out to be a well-worn Playstation 2 controller, but since I don’t have a PS2, well … it’s going to become something else. 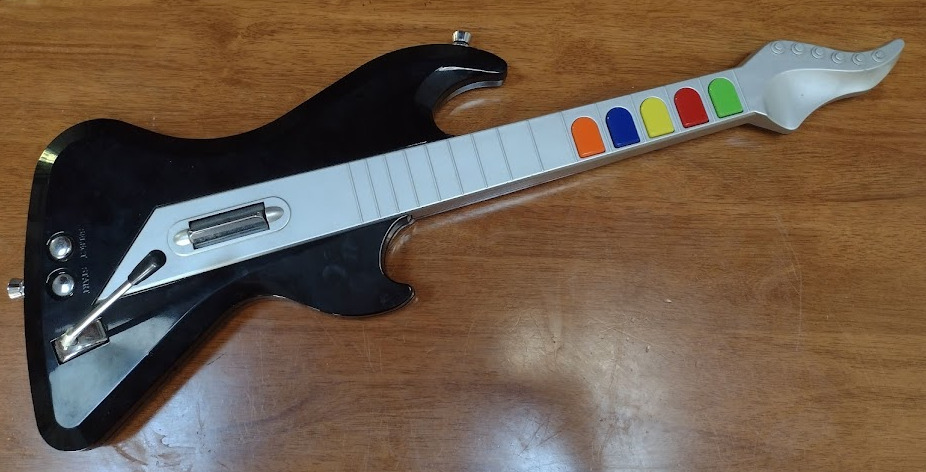 Inside, it’s very retro … a total mess of little PCBs and flying wires instead of the more modern flexi-PCB kind of construction. But that’s good for my purposes, since it makes it much easier to butcher. 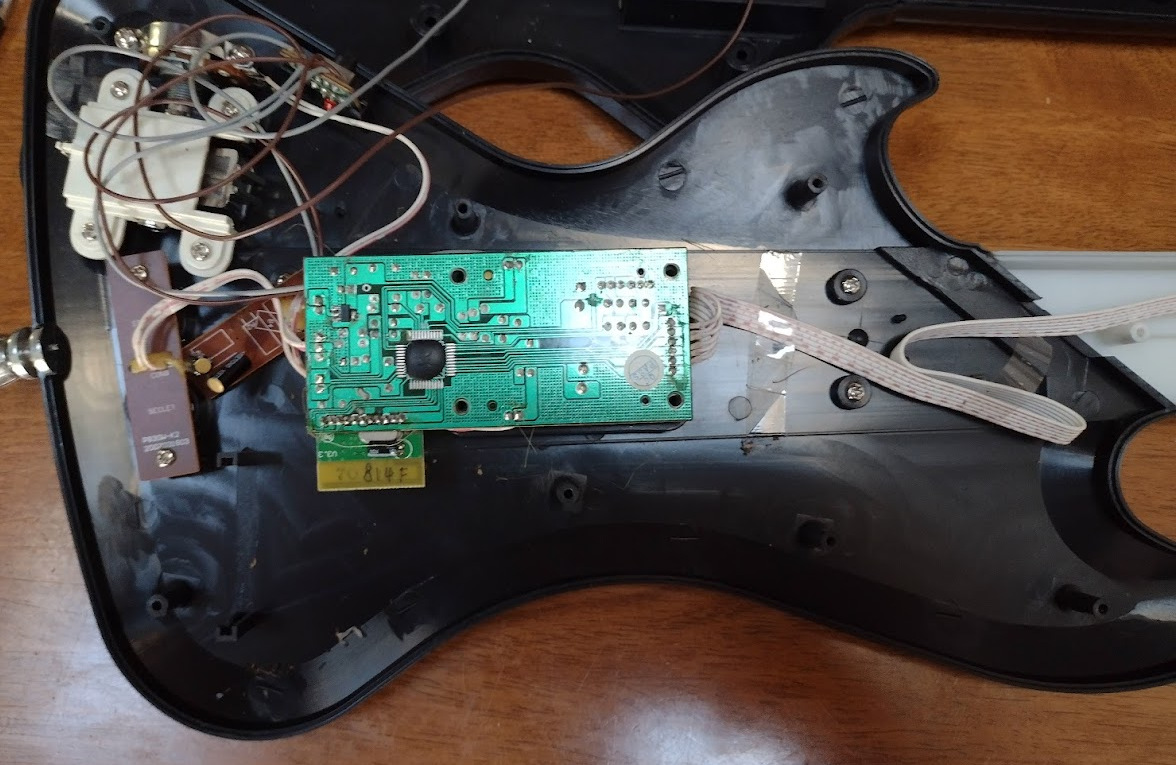 A Big Mess of Wires

In its current form it has:

… Let There Be Rock

So, the plan is to turn this ridiculous thing into something which can actually be played as a musical instrument. The obvious choice for this is MIDI, a standard invented back in 1981 for doing exactly this kind of thing. The guitar would send MIDI messages and then a synthesizer, or synthesizer software running on a computer, turns that into actual music.

There are real ones of these controllers out there already but that’s not entirely the point.

Computers can receive MIDI signals from a special interface to the old-school 5 pin MIDI, or MIDI over USB. Since I don’t have one of the former handy right now I’ll concentrate on the latter for the moment. As a bonus, USB can provide power to the instrument.

5-pin MIDI or synthesized audio might also be useful for live performance, but let’s not get ahead of ourselves here :-).

5 fret buttons doesn’t seem like much compared to the 90-odd fret positions on a real guitar neck. But there’s a lot of songs which have a small number of chords, thankfully. 99% of my ukulele songbook would get covered by:

Or something like that, anyway. There’s still a few playable combinations left over.

Chords actually sound pretty bad with a lot of the synth tools I’ve been messing with. They add plenty of weird crap to make up for the “thinness” of a single note, so maybe we need a chromatic solo mode, maybe something like:

or alternatively it might be easier to have one button, probably the middle button for ergonomics, be a dedicated “sharpener” button:

Anyway, the point is, it’s an arbitrary mapping between button combinations and note combinations, and those extra “select” buttons could switch between mappings.

The frets would be used to select which chord to play, but the strum sensor would be responsible for actually triggering it. 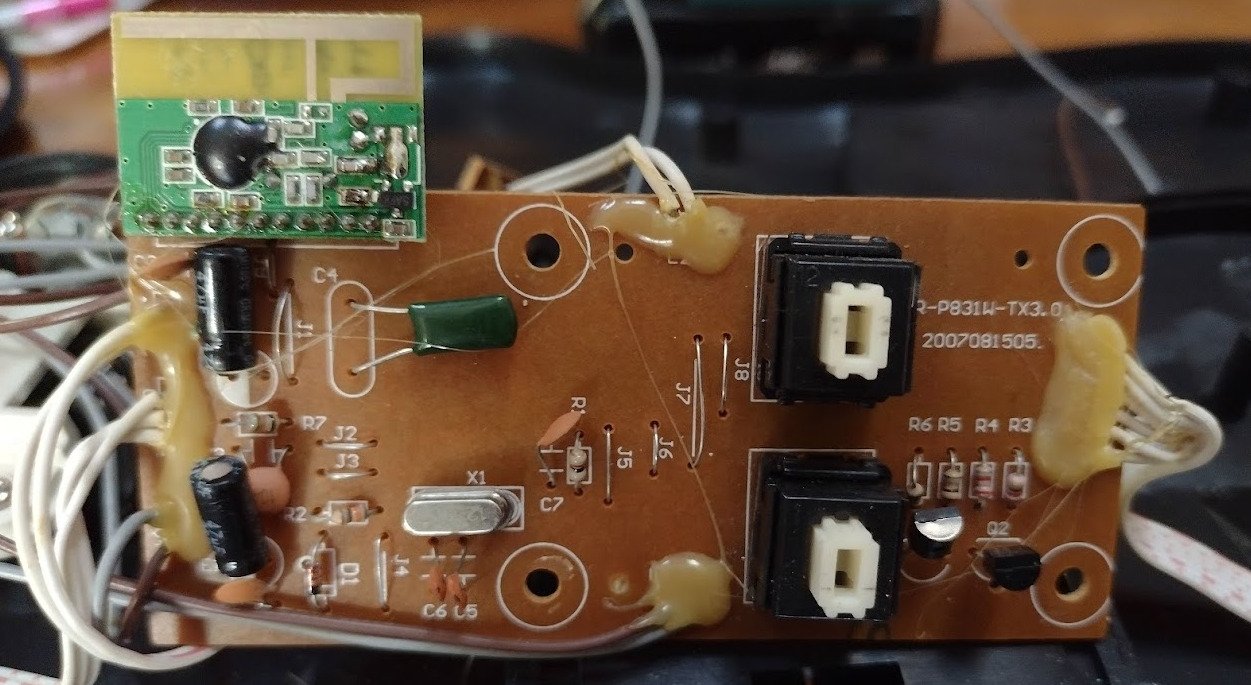 strum mechanism (the two buttons on the right

The strum mechanism is really just a little cam which operates two switches which look suspiciously like ALPS clone keyboard switches. These are mounted on the back of the main board, which mounts to the case using four screws. I’ll probably replace this with a bit of proto board with a couple of similar switches on it, but it might be nice to consider some kind of piezo sensor to give the instrument some expression

The relationship between the two different switches and the MIDI message I’m not sure about. Should an upward strum be different from a downward strum? Is a down-down-down-down strum different to a down-up-down-up strum? Does holding the ‘flipper’ down do anything different? This will take a bit of experimentation too see what “feels” right I guess.

Up and Down strums could even feed different instrument numbers, or different modes (eg: chord vs: solo) or voices or octaves or different velocities, or all sorts of things

There’s a little Whammy Bar which operates a standard metric potentiometer. It only rotates one way (down), but it should be able to feed a MIDI pitch wheel input.

This looked pretty dreadful when I first opened it up, but it’s not as bad as I thought: I’ll just wire it across 3.3V and Ground and that should be enough to give me a good analog signal for the ADC. 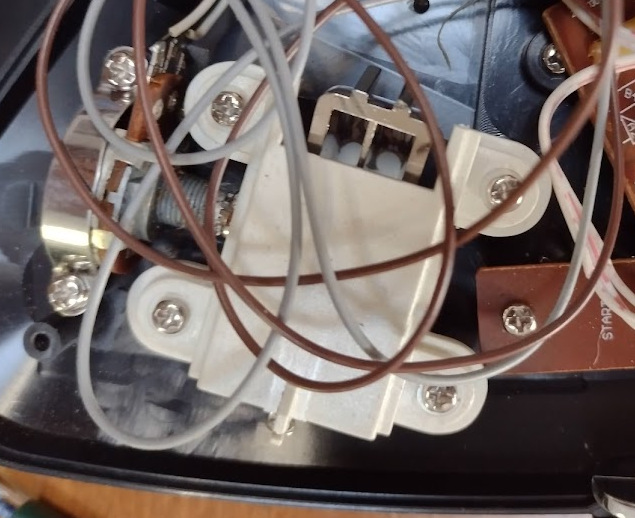 There’s also the START and SELECT buttons which could send other MIDI messages to change channels or instruments or whatever.

There’s plenty of empty real estate on the guitar, so adding in some other inputs should be possible. Perhaps for example a capacitive slider strip on the unused part of the neck for “fretless” operation, or various knobs to send MIDI CC messages.

There’s a board with a couple of tilt sensors already, but an accelerometer would be a more modern alternative and could feed into a control channel as well.

Plus, of course, I should make some room for neopixels!

Handily there’s a CircuitPython USB MIDI library already. I’m a big fan of not writing C if I don’t have to and this library supports a lot of junkbox boards I already have, so that seems like an obvious choice. I just have to find one with enough I/O pins.

Just to begin with I need 5 digital I/O pins for the fret buttons and 2 for the strum buttons. It’d be nice to have a couple of analogue inputs for knobs, too.

I have a ‘beta’ adafruit Metro M4 Express lying around from some work I did a long time ago and it comes with USB-MIDI already on board so it seems like a good choice.
I’ve upgraded that to CircuitPython 7.1.1.

There’s also I2S support so it’s possible I could implement a Karplus-Strong synth right on the instrument with output to a standard guitar jack, but I’ll worry about that later.

It seems odd at first, but USB devices can present as many kinds of thing at once, using “endpoints”. So the single USB port on the board can simultaneously present as a mass storage device (for program code) and as a serial terminal device (for the interactive console) and as a MIDI device for sending music to the computer!

Linux audio support continues to be a nightmare but I eventually worked out that the devices were visible from ALSA and got fluidsynth working via its GUI “qsynth”. I’m really hoping there’s a friendlier way to do this in the future!

Using amidi, I dumped some raw MIDI messages out of a little AKAI MIDI keyboard, and then turned them into this work of musical genius:

This is just sending a sequence of raw MIDI events over the USB port, and yes! It works!

So, all our code will have to do is listen for buttons and send similar messages. Almost too easy!

Also in the junkbox: a Freetronics ThinkerShield There’s not a lot on this board, although it’s kind of handy if you like alligator clips, but there is a pot and a pushbutton. Which is enough to implement our first interactive MIDI instrument, which sounds like a glitchy theremin played through autotune:

I can already see that CircuitPython’s lack of interrupt driven I/O is going to drive me bananas, but let’s stick with it for now.

No Guts, No Glory

It’s time for the innards of the guitar to come out. The original boards can go in the junkbox, perhaps they’ll be handy to make a MIDI input for PS2 so you can play Guitar Hero on a keytar :-)

Once all the extraneous parts are out, in goes a new board for the strum buttons. The dimensions are actually pretty tight, so I desoldered the old switches. The little protoboards i had are juuuuuust too short for this job but this is okay for a first go around.

So I’ve done a very rough job of soldering the five fret buttons and two strum buttons to I/O pins 6 through 12, and wedged the board into a corner of the case … and well, it kinda sorta works:

I implemented the “Alternative Frets” tuning as above, which sounds a lot better through the synth program than feeding it chords. I also made an “up strum” shift the note played up an octave, so now the instrument has 2 octaves range, from C4 to C6.

I also hot-glued the CPU board into place, added strain relief to the USB cable and rewired the thing completely. Originally I’d just soldered onto a bunch of 0.1” strip headers and plugged those into the Metro board, but that was pretty dodgy. This time I used a little “prototype shield” board I bought off Ebay ages ago. This makes it a lot easier to solder and much less prone to falling to pieces in your hands. There’s no room on the top side of the other proto board as it turns out, it’s hard up against the case, so this will also give me a place to wire in an accelerometer as well.

All the pin assignments have changed, but there’s now a whammy bar and the select and start buttons are wired in. The input pins are all set to pull down and the buttons pull them up, which makes the code more readable!

When I get around to it I’ll add a pair of pots for setting control channel info. 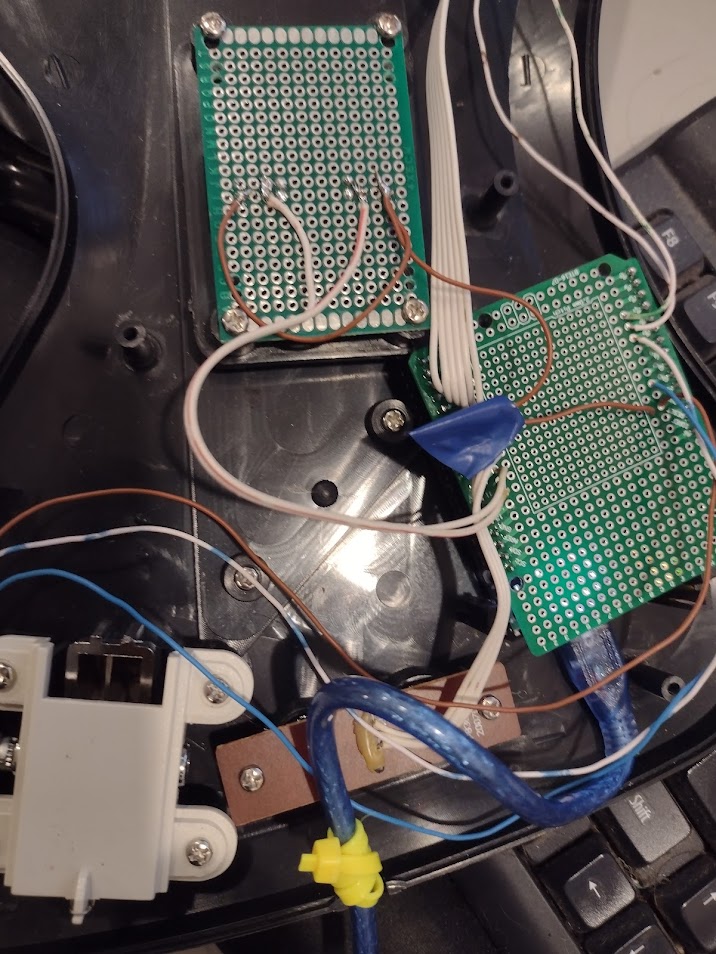 The soldering is terrible, but the code is very slowly improving:

I’ve also been playing with LMMS, and have worked out that by assigning a channel ID to each instrument, I can make it specific to that MIDI channel. The MIDI channel could be set by the strum direction or by the “Select” button, either way. It’s quite nice to be able to switch instrument chains at the touch of a button.

So it’s kinda sorta playable, but there’s a lot of things still to do:

UPDATE: IS THIS A GOOD IDEA

MIDI instruments are cool. If you want to make an actual MIDI musical instrument, don’t try to turn a $7 toy into one, start from a blank canvas. These fret buttons are super nasty rubber things and there aren’t really enough of them. This strum mechanism is crappy and plastic. Maybe a brand-name controller would be less crappy.

It was kind of fun though and it looks pretty funny.

You could easily make something nicer using good quality keyboard switches for the frets and velocity-sensitive piezo pads for the “strum” mechanism.

My “vision” for it would have a grid of keys for the fretboard, perhaps arranged like a tiny piano or perhaps more like the buttons on a Button Accordion. For strumming, there would be one or more velocity sensitive pads which could be tapped with the right hand, with different pads corresponding to different MIDI channels, and some knobs for setting parameters.

An alternative would be to avoid MIDI altogether, and instead have the fret buttons activate a series of simple electronic electrical resonators set up to very slightly decay, and the piezo strum sensor to inject an electrical ‘kick’ into these active circuits to cause them to ring. It might be fun to prototype something like this anyway.