UPDATE: I’ve written a whole bunch more about this sort of stuff at Journey Onward: the Apple 2 and me and Writing an Apple 2 game in 2021

Some time in the early ’80s, Dad brought home an Apple 2 clone, pretty much identical to an Apple II+ except the instead of the first line of the display saying APPLE ][ during boot it said GALAGA. I think it may have been a Sekon: the lower/uppercase switch sounds familiar.

Ah, Applesoft BASIC and the first thrill of programming

With it came a dusty shoebox full of pirate floppy disks, hand labelled and mostly turned into flippy disks by cutting a second write-protect hole in them so the backs could be used for more software: double the capacity!

I have fond memories of Lode Runner, Apple Cider Spider, Choplifter, Conan and The Bilestoad. Rocky’s Boots went on to inspire Flobot.

You can try Apple 2 software out in your browser using the excellent apple2js Apple 2 emulator.
This is a CPU level emulator of the Apple, running in plain old Javascript. Incredible. I’ve used it for screenshots in this article.

Quest of the Avatar

But the undisputed champion of games was Ultima IV, which was not merely an ephemeral game, something you played for a few minutes, but an adventure in which you had to explore, learn and build up your resources to take on more fearsome enemies.

The game was so large it used four floppy sides, and much swapping of disks was required, with the game halting whenever you entered or left a town or dungeon to demand a swap of disks. When you quit the game, your progress was saved to the “Britannia” disk. Of course, if things were going badly you could just choose not to save.

The game was supposed to come with various materials and an ingenious piece of copy protection: an instruction book and a cloth map. These were difficult to photocopy with the technology of the day, and necessary to answer questions at a few key points in the game. Of course, being a pirate copy, it had none of the above and it wasn’t like we could just look it up online. 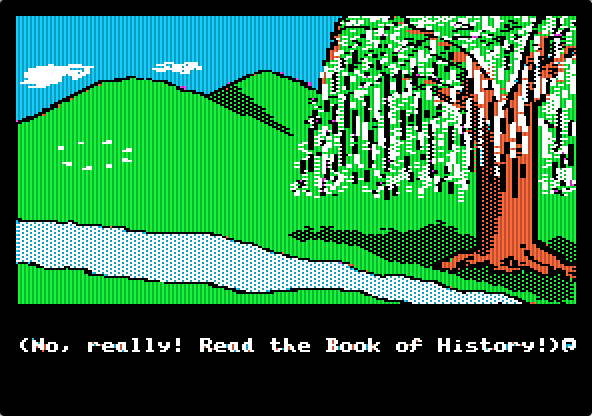 (No, really! Read the Book of History!)

Additionally, I was never the most patient or methodical of kids, and so spending hours jotting down clues and beating up on skeletons and orcs to build up enough funds for a decent sword was maaaaybe pushing it a little.

(If you actually want to try playing, the easiest way is to download the free PC/Mac version of Ultima IV from GOG.com. You don’t need to change disks all the time, the graphics are better and some gameplay bugs are fixed.)

The disks aren’t included in the apple emulator above, but you can download them at wowroms and point the emulator at them. There’s also a version at virtualapple.org featuring this excellent “crack screen”: 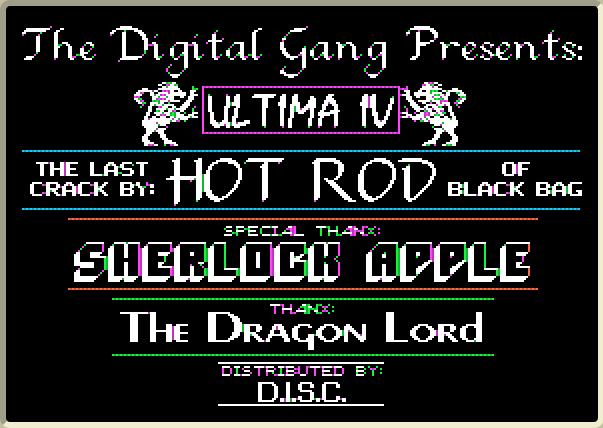 A small set of assembly subroutines, build into the system ROM, take care of sector access. These are known as RWTS (“Read/Write Track Sector”) and form the interface between software and hardware.

There’s lots of details of these things out there: in those primitive times we were forced to fend for ourselves with only a couple of Beagle Bros publications and a mysterious glue-bound book entitled “HARDWARD MANUAL” for advice.

As it turns out, there were some more disks in the dusty shoebox, including a sector editor

(Probably Copy II Plus 5, which includes a sector editor among other things. You can find it at apple2online.com)

A sector editor lets you investigate and change the contents of floppy disks. Apple 2 disks are not large or sophisticated, and indeed if you create a new character, and save the game, you can use your sector editor to check out the map disk and find your new character’s name stored neatly at Track $14, Sector $4, Offset $04 If you’re looking in a disk image file, that’s offset hex 14404 (but note that the character codes in caps but offset by hex 80 and terminated by 00, so NICK would be stored as CE C9 C3 CB 00. 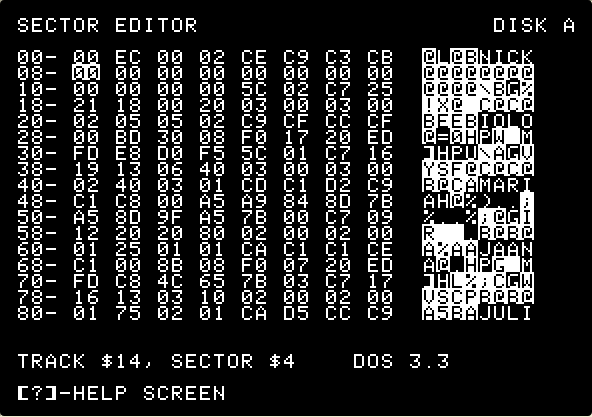 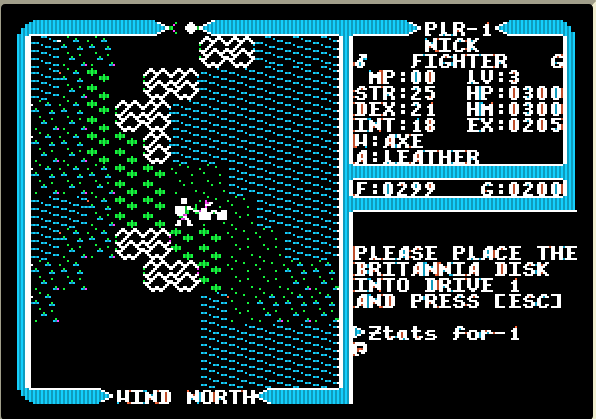 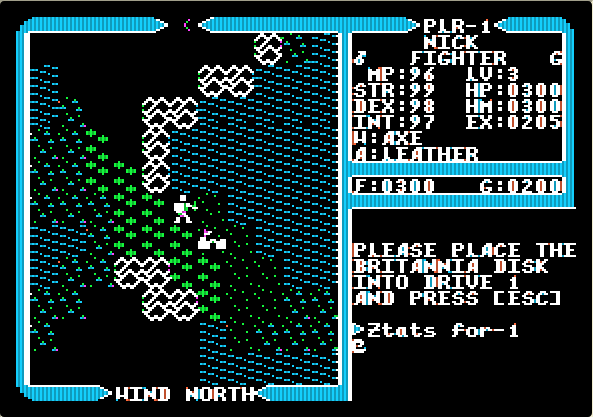 OK, now we’re in business. With a bit more messing around and comparing save games we find that there’s quite a lot of things we can change in track 14 … 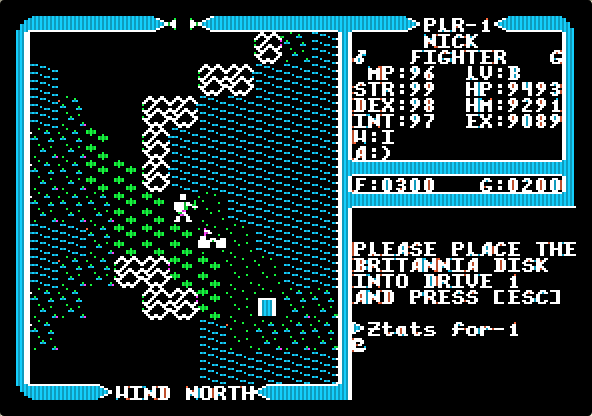 Anyway, you get the idea. The game moves along a lot quicker once you’ve got 9, 99 or 9999 of everything, even if the display is sometimes a little glitchy.

Interestingly, these values are mostly stored in Binary Coded Decimal (BCD) which stores each digit 0-9 into a hex nibble. The 6502 processor supports BCD calculations through a “Decimal Mode” which makes it easy to calculate addition and subtraction of BCD numbers.

The “save” area is almost certainly just a write of the memory space used for keeping track of the status during the game. Writing weird values here and there certainly can make a mess of the game state, but it’s pretty easy to keep backups of the Britannia disk.

Just for fun I worked out a few more disk locations:

Names & stats for each of the other party characters follow. By carefully experiment, you could work out what each byte means and how to set all party characteristics, and also the position of ships, the balloon, etc.

I’m not sure if we ever did work out, back then, how to change the stored position and thus teleport around the map, but once you have STR 99 / DEX 99 / HP 9999 and plenty of reagents to unpoison yourself at will it’s pretty easy to get around Britannia sweeping up monsters.

But there was still the matter of the map. We’d got hold of the Sextant by this point, which would give you a latitude & longitude in the format A’B” C’D” where each letter was between A and P. That’s a pretty thinly disguised pair of bytes, so we were pretty confident that the world was

But how was it stored? The hint came in the form of a rectangle of very weird ocean. When we sailed around the back of the world, to coordinates A’A” A’A”, in the middle of the deepest ocean was a rectangle of … random stuff. 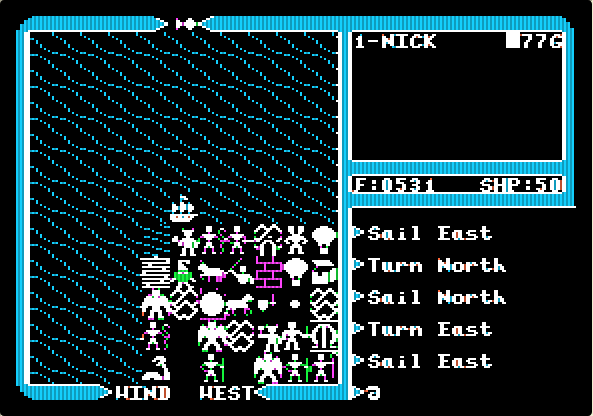 random stuff in the map

It didn’t take too long to work out that was pretty much a 16x16 block, taking up locations A’A” A’A” through A’P” A’P”. While the sea was sea, the monsters weren’t real monsters … just tiles. Indeed, as it turns out the map is stored in 16x16 regions, each taking up one 256 byte disk sector, on the 16 sectors of the first 16 tracks of the disk.

The weird stuff in the ocean? That was a DOS 3.3 boot sector which had been accidentally written to the disk at some time during its pirate misadventures. 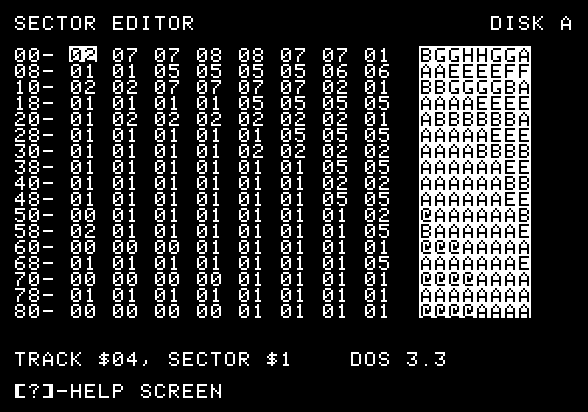 After a while you realize that you can pretty much see the map right there in the sector editor.

It’s interesting to note that there’s plenty of spare room on this disk: the map only uses up 16 tracks out of 35, and the last few tracks are entirely blank.

Our next step was printing a map from this data. I can’t remember exactly how we did this now, but I do remember designing 8x8 1-bit icons for each of the more common map cells (deep ocean was completely blank) and writing a program to load two sectors at a time and turn each pair into a dot-matrix printable image about 10cm x 5cm. 128 of these small rectangles of printer paper were then cut out and glued together to form a giant, if rather scruffy, map.

Sadly, the physical map and the programs used to produce it are long gone. 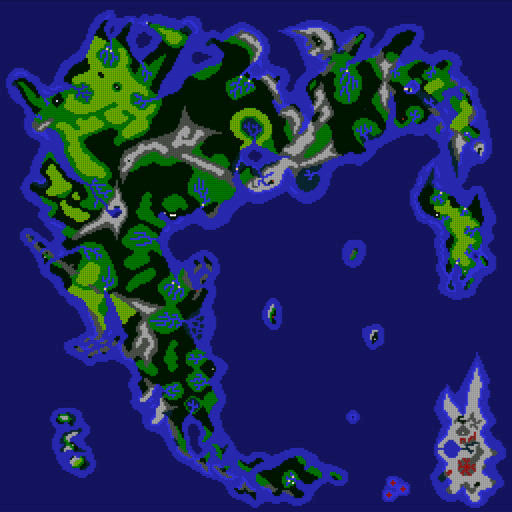 The towns are stored in a similar manner on the “towns” disk, with each of the 17 town maps having a 32x32 map. There’s 17 because there’s an upstairs and a downstairs of Castle Britannia! That disk also contains all the conversations you can have with townsfolk.

There’s more of that sort of thing on this old Ultima IV page of mine.

Nostalgia ain’t what it used to be

Anyway, the point of this article isn’t really Ultima IV. I don’t think we ever even finished the game, in any real sense. (I suspect the only game I’ve ever really “finished”, in the “without cheating” sense, is Portal.)

The point is that through this process I learned too see software as observable, mutable, fallible. Looking at how the software behaved led to a theory of how it might be changed, and those changes altered the game. But if you altered it too far, unexpected things could occur, things which the game designer never considered.

And that put me on the road I’m on today …