Progress has been very slow as I’ve picked up a new contract which does tend to cut into my 6502 assembly writing time.

Previously I mentioned that there’s no way to detect a key being held down, and there’s no key autorepeat. So we’ll have to remember which way the goose is going, and keep going until it hits something or the user presses a stop key.

So I’m going to abandon the traditional WASD keyboard layout for WEASDZX layout. 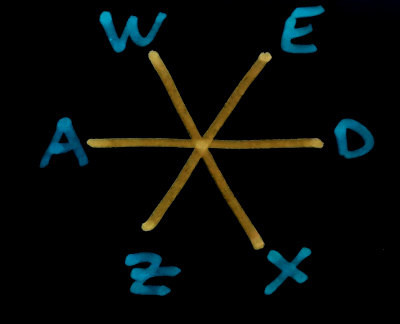 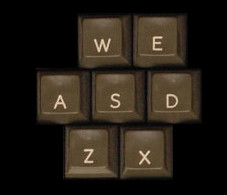 S in the center is for stop, since we can’t detect key releases. There have to be a couple of other keys on the right as well, for grabbing and carrying things. probably L and P.

If I can work out how the mouse -> paddle support works in the emulator I might try and support joystick mode too.

The main thing I actually achieved in this cycle was to work out how to embed the game into a web page so you, dear reader, can play with it.

Thanks to the magic of iframe and the incredible work of Apple2js I can embed code demos right here in the blog! This might not work perfectly in all browsers, but try mousing over the window and pressing A, S and D to move the goose …

In the previous article I included a small .gif movie of the goose animation which clocks in at about 1MB. Incredibly, the entire Apple 2 emulator plus the disk image for the lores goose game comes out smaller than this!

The goose doesn’t really move but the background scrolls. The bounds checkings is a bit suss so you can walk over the edge of the map and into uncleared memory.

There’s no way to actually measure time or wait for a frame, so the animation is kind of frantic. But at a very minimal level, there’s keys being read and graphics being written so it’s kind of on its way.