It’s 2022, just over a year since the last update of this series, and, well, life has continued to get in the way of my plans :-)

This article is just a random grab-bag of progress I’ve made and thoughts I’ve had about where to go next.

Currently the background is also just a bunch of random dots. Let’s fire up mtpaint, give it an Apple2 palette file and draw something terrible. 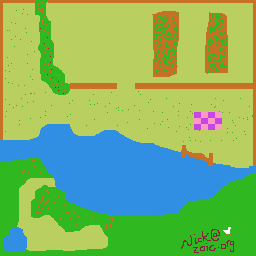 Okay so I’m no artist, which may prove to be a problem as this project continues, but at least this gives me some idea of what it’s like for our goose to navigate through a map.

I wrote a little utility img2acme.py which loads the image using Python Image Library, shuffles bytes into the order expected by my code and writes it out in ‘acme’ format for inclusion into the project’s source code.

The acme code includes the binary pixel data, but also symbols for the width and height of the image.

One thing which is really obvious from the part 3 simulation is that there’s no boundary to the screen. Our goose wanders where it will, with no respect for memory layout. It makes sense to add in some code which checks if the goose is at the edge of the map, and if so cancel its movement if it has reached the edge. As a bonus, we could change the scroll behaviour so that as the goose reaches the ‘edge of the world’, it moves from the center of the screen. This would provide a very clear signal that there’s no more map over there.

The old loading screen just looked sort of sad too, so I used the same technique to make a splash screen

This gives the computer something to display while the code is loading. It’s a bit of a waste of space, but once we’re ready to play the memory this screen takes up can just get thrown away …

I display this screen in “mixed” mode where there’s 20 rows of pixels and straight after including the image I include 4 rows of text:

As map tracks get read in it adds more digits in the bottom right as a kind of progress indicator.

Note that the JS simulator speeds floppy access up about tenfold compared to the MAME emulator which has a more realistic speed. So our splash screen doesn’t get as much time as it should.

Let There Be Sprite

We can use the same tools to create sprites. We’ll need a bunch of them. Some of them will be static (eg: vegetables) some of them will need multiple frames (eg: people). As discussed previously, we can use color index 10 as a transparent pixel, to export the sprites from mtpaint this way we just tell it to use index 10 as transparency when exporting. 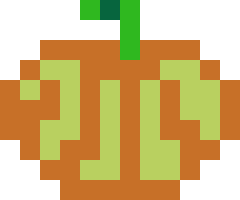 One of the really cool things about the original Untitled Goose Game is the way the map is contiguous and loops back around on itself, so that you can get to the very end of the game and retrace your steps and carry items right back to the very start.

BUT that’s really not something I can be bothered dealing with here. The Apple2 is very limited and the disk is very slow and the whole CPU has to wait for it … there’s no way to load more map in while the disk is reading.

What the hell, Portal had levels. I can have levels. For each level, it’ll load only as much map as will fit into memory, and also the code which runs the items on that map. When the goose gets to the exit of the map, we go back to the loader, which grabs the next few tracks. You can’t carry items between levels, you can’t retrace your steps, whatever, deal with it ya goose.

The goose is shared between levels, but I think it’s likely that the specific sprites and behaviour code used for each level will be stored along with that level’s map.

Note that the initial track load starts from $0800 which overlaps with LORES 2. We need the loader to load later levels, but the overwritten part could just be the splash screen and/or we could copy that content out to otherwise unused parts of memory ($0200 - $02FF, $3800 - $3FFF)

Or we could have fewer, larger maps with more tracks each, or use something like run length encoding to encode each level’s map on disk, reducing the space it takes up and speeding up loading considerably. Maps will still be uncompressed in memory though: the problem is, where do we load them to while they are being decompressed?

What we’ve got so far is just a single sprite and a background. That’s not much of a game. We need to support multiple sprites, more natural movement and much much more …

The goose game maps have lots of barriers in the scenery — fences, walls, shrubs — and finding your way through these is an important part of the game. The movement routines need to be told about these somehow. One possibility here is to encode the “impassibilty” of a part of the map into the pixel values of the map. A byte value of $Ax or $xA (Colour $A is that “Grey #2” we’re using for sprite transparency) might be used to indicate that a location is impassible, for example, so scattering a handful of grey pixels into the scenery would be sufficient to enforce these barriers. Grey parts which are not impassible, like gravel paths, could just use the identical “Grey #1”, encoded as $5.

Alternatively, we could encode barriers as a separate bitmask, or as simple exclusion rules stored alongside the map, for example for each row keep a list of columns which are forbidden. We can make the map just slightly narrower to give us space for this stuff at the end of every row.

Sprites need to be rendered from back to front so that they occlude each other correctly. The easiest way is probably to render them in ascending order of bottom row. Some of them move around though: this could either be done by maintaining a sorted list of sprites, or by scanning through the list of sprites 24 times.

There’s also moving barriers, gates and the like. We have to handle sprite collisions for things like people too, because they block and/or shoo the goose, so we can probably just treat inanimate objects like NPCs who happen to have very boring behaviours.

We’ll leave that to next time.

Our goose, and various other sprites, are also rendered differently when in the water … the lower couple of rows go missing. This could be done by map pixel color keying on two blue pixels, encoded as $66, or by encoding wet areas similar to the exclusion rules mentioned above: for each row, a range of pixels can be declared “under water” and this is then easy to check against.

The stuff about sprites brings up an interesting point: while there’s a bunch of ‘vegetables’ in the game, objects which don’t really do anything but you can carry them around, there’s also a bunch of objects which have actions. Gates open and close, humans give chase, sprinklers, umm, sprinkle, that kind of thing.

I think the way I want to do this is to have the “action” in the loop just update the status of the object. Then the code in the “logic” part of the program can detect the actions from the states and update their state, sprite and position accordingly.