Nodebots Day is an event about building robots running Javascript, and about getting people started on learning about robotics and programming through a fun, informal competition.

The nodebots robots are built from simple, cheap components and being build out of cable ties, hot glue, tape and corflute they’re very accessible to kids.

Charlotte (12 at the time) and I attended in 2017 and I brought with me a whole bunch of extra parts, of course. Since there was a whole bunch of ESP32s in the junkbox already, we decided to depart a little from the program and build something which could run MicroPython.

These parts are even cheaper than the original Nodebots parts, so I felt like they were in the spirit of the thing! 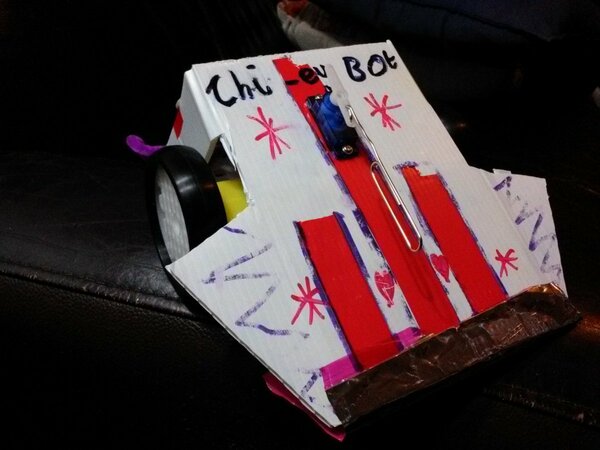 The result, christened “Chipey bot” is a simple wedge-shaped sumo bot. Rather than using a jockey wheel or a ball bearing under the nose, we decided to let the nose slide on the floor. The battery (which is one of the heavier components) is mounted in the nose and the chassis extends back past the wheels to prevent the robot from flipping over.

Charlotte came up with the idea of making the leading edge more slippery by gluing on a strip of Mylar chip (crisp) packet which is very slippery even with the chip grease carefully washed off. This gave Chipey-bot its name, and also an undeniable advantage in the ring, with the front edge sliding under opponents and lifting them. 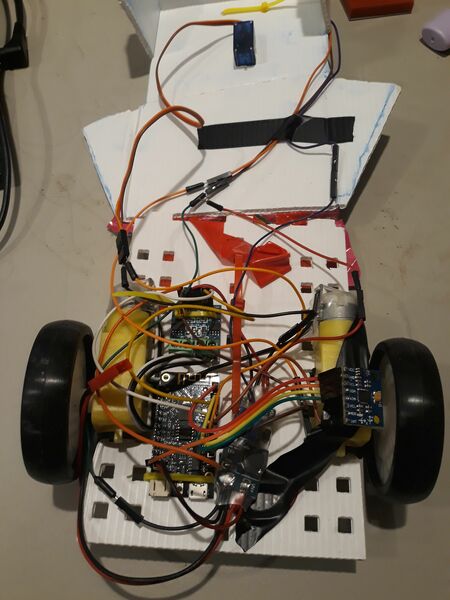 Internally, the robot is made of modules connected by hookup wires. It’s pretty cheesy,

The ESP32 runs a tiny webserver to receive steering commands and drives the two wheels independently via the L9110S H-bridge driver.

The LiPo supplies 3.6 or so volts, but the motors are capable of taking a whole lot more, so a DC-DC boost converter provides about 8 volts to the motor driver which greatly increased the power available.

The intention of the servomotor was to have some kind of arm to push other robots off the top if they became stuck, but we never got around to making it work before the competition was upon us.

The photos above also include some later additions while helping with the design of LoliBot, Chipey-bot grew:

LoliBot was the Open Hardware MiniConf project at LinuxConfAU 2018 … I didn’t have much to do with the hardware but ran a MicroPython tutorial.